One month ago yesterday I ran my first goal race of 2018, the Loudoun Half Marathon.  Having run this race last year, I know that the course for this half marathon is anything but easy.  It features rolling hills throughout, but nothing that is unmanageable or that I am unfamiliar with here in Northern Virginia.  I was excited to run the course again after having run a fairly strong race last year.  After completing a strong training cycle, I was excited for what was to come on race day.

Despite being well prepared, as well as the weather being ideal for racing (it was in the high 40s and low 50s during the race, and there was almost zero wind), it just wasn’t my day.  I know that I put forth my best effort throughout the entire race, and because I did so I am not disappointed in myself.

Race morning started off with me leaving the house around 5:30 a.m.  I pulled into the parking lot of the local high school where the race started and finished at just after 6:00, and within five minutes of parking returned to the car with my race bib and shirt.  I sat in the car for awhile, finishing my breakfast and staying warm.  Around 6:40 I left the warmth of the car to use the bathroom, and then made my way to the start line.

The race started on the street in front of the high school.  With right around 550 people running this race, the start area wasn’t crowded at all, and I easily found a spot to stand while I waited for the race to start.  At 7:00, the “Star Spangled Banner” was sung, and at 7:02 I crossed the start line.

Since I had trained using 4:15/0:45 run/walk intervals that’s what I had planned to run throughout the entire race.  I had to skip the first walk interval due to usual beginning of a race crowding, but by the time of my second planned walk interval the crowd had thinned out enough and I had found myself running in a very comfortable rhythm.  I continued to feel strong during the early miles of the race, which weaved through neighborhood streets.

Just prior to the mile 4 marker, the course took runners onto a portion of the W&OD Trail, which is a pedestrian and bike trail that runs throughout Northern Virginia.  The trail featured the flattest miles of the course, and I knew that I needed to not push myself too hard if I wanted to be able to continue running a strong race after exiting the trail.  Although my pace slowed slightly during the trail portion of the race, I continued to remain optimistic about my ability to run a strong 13.1 miles that morning.

It was an absolutely beautiful morning to run a race

Despite my best efforts, I began to lose momentum after exiting the trail just past the mile 7 marker.  As the rolling hills intensified, my pace slowed down more and more.  Although I never had to take extra walk breaks, it was clear looking at my splits that I really struggled with my endurance during the second half of the race.  The further that I ran, the the heavier that my legs felt, and the more it became clear that it just was not my day to run a strong race.  I did my best to focus on remaining positive and simply doing the best that I could.

Running up one of the many hills on the course

Still smiling during the second half of the race despite how slow my pace became
Photo Credit: Potomac River Running

The closer that I got to the finish line on the high school track, the more that I wanted to push myself with the small amount of gas left in the tank to finish right around two and a half hours.  My official finish time was exactly 2:30:00 (11:27 pace), and according to my Garmin I ran 13.25 miles (11:19 pace).  Although this wound up being one of my slowest half marathons ever, I didn’t give up despite how challenging running that morning wound up being for me. 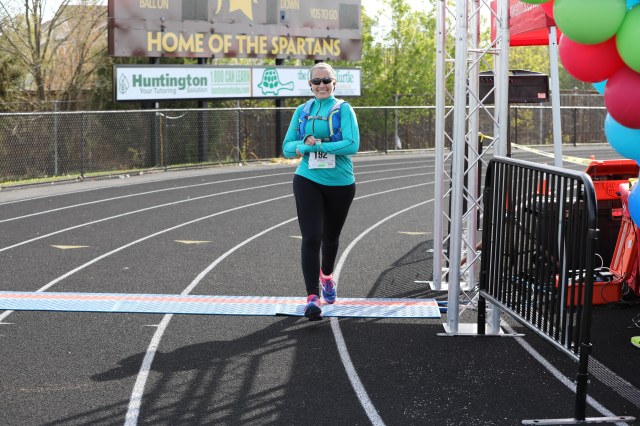 Upon crossing the finish line, I received my medal as well as an insulated lunch bag filled with snacks.  I also received a bottle of water and a bottle of Gatorade.  I took advantage of the free stretching offered by a local physical therapy company.  It felt incredible to have somebody help stretch me out after a challenging morning of running. 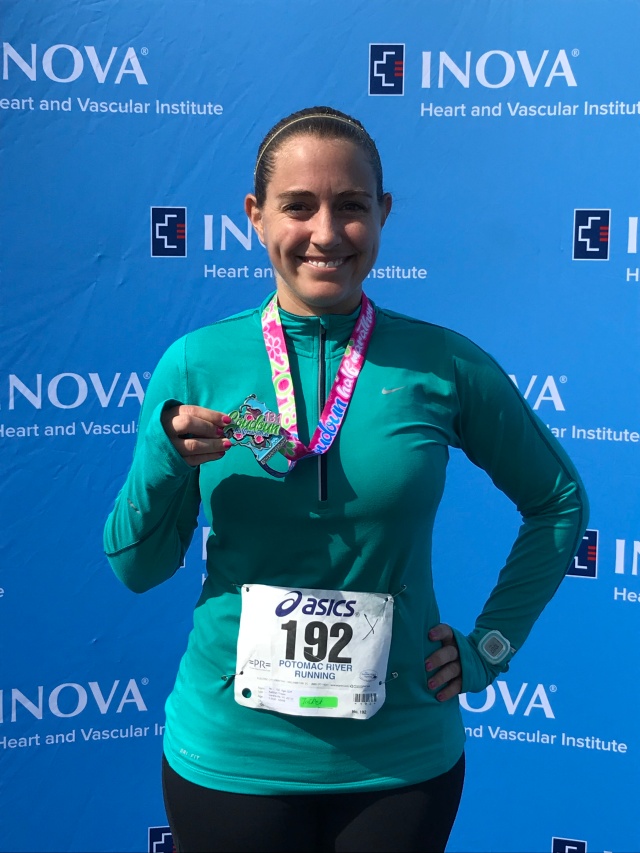 Celebrating having finished my 16th half marathon

Having fun at the photo booth at the finish line
Photo Credit: Inova Healthcare

Overall, it was another great local race.  For only a $55 registration fee, I felt like I got more than my money’s worth: lots of aid along the course with a total of seven water and fuel stops, and a well staffed start and finish line area with with easy and convenient day of packet pick up as well as more than enough food and entertainment at the finish line.  There were also free race photos.  Just because it wasn’t my day for racing had no bearing on my opinion of this well organized local race.  I know that this was a challenging course, and although it took its toll on me last month that does not mean that I will never run this race again.  In fact, it is already on my radar for 2019, as I am determined to show this course what I am capable of.

QOTD: How do you motivate yourself to keep moving forward during a difficult race?

This entry was posted in Races and tagged half marathon, Loudoun Half Marathon, Potomac River Running. Bookmark the permalink.

35 Responses to 2018 Loudoun Half Marathon Recap