Posted on February 2, 2018 by Kathryn @ Dancing to Running

Like most people, I was very motivated to get the new year started off on the right foot.  I set ambitious goals for myself for both January and the entire year.  And despite a set back mid-month when I dealt with some groin pain, I did really well with staying on track with my January goals. 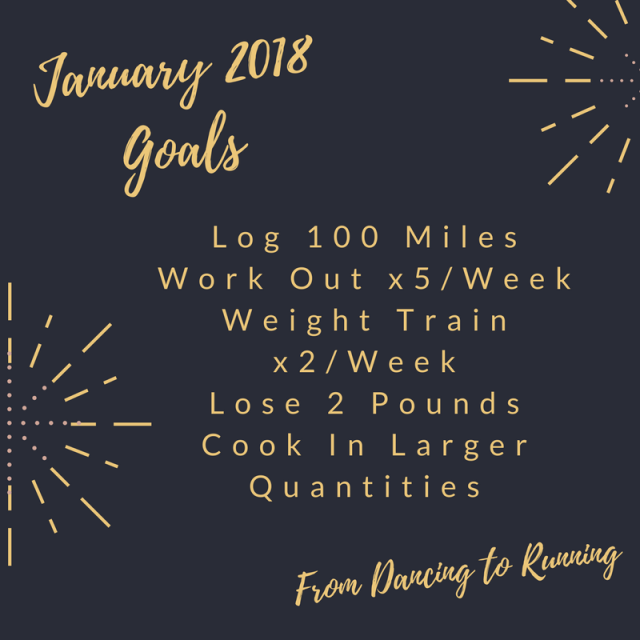 My January mileage total was 92.2 miles, just 7.8 miles short of my goal.  In the past, I’d be kicking myself for coming so close to meeting my goal but not reaching it completely, but I’m allowing myself some grace since I wound up needing to skip a couple of workouts in favor of extra rest for my groin.  The 92.2 miles that I logged last month puts me 7.6% of the way towards reaching my 1,200 mile goal for 2018.

2.  Work out at least five days per week.

I met my goal every week in January, with the exception of one week when I was dealing with the groin pain.  Again, I’m trying to not be hard on myself about this since I needed to listen to my body and give it the extra rest that it needed.

Just like with my second goal, I met my weight training goal every week except for one, though I did do an extra strength training session that week, it just wasn’t with weights.

Even though the month was a bit of a roller coaster in terms of my weight loss (by mid-month I had lost three pounds, but then gained most of it back and lost some again), I ended the month exactly two pounds lighter than I started the month at.  Success!

It also always feels good when you feel better wearing a certain piece of clothing that was previously tight on you.  I had the exact feeling earlier in the month when I wore a dress to work that when I wore it back in December I was far from happy how I looked in it.

Each week last month I did cook at least one larger meal each week, which resulted in some leftovers but not enough to last the entire week.  My family also ate out or had take out only a handful of times in January.  Although I wound up taking far fewer frozen entrees to work for lunch last month (even though they are far from the healthiest option the convenience factor cannot be beat), I still have some progress to make.

Overall, January was a very successful month and I’m optimistic that the same motivation that I had last month will carry over into this month.

Since I fell just a tad short of my mileage goal last month I want to go for it again this month.  Even though February is the shortest month of the year, I still want to see what I’m able to push myself to accomplish.  I do have two double digit runs on the calendar for the month (my last long run for Princess Half training will be next weekend, and then the half marathon is at the end of the month), which will greatly assist me in reaching my mileage goal.

2.  Work out at least five days per week.

Even though I already met this goal last month, I want to continue moving forward with my weight loss, which means I need to continue to remain very active.  February is historically a roller coaster month when it comes to the weather, and the weather always affects my motivation for working out.  So hopefully by having this goal I’ll remain motivated to keep moving regardless of what the weather is like outside.

Since I didn’t 100% meet this goal last month I want to go for it again this month.

Even though I know that February will be more challenging than January was in terms of weight loss, I want to continue moving forward.  In addition to having several social events on the calendar this month, I will also be away at Disney World at the end of the month.  There will be lots of tempting opportunities to get off track, but I need to stay focused if I want to be successful.

I am now just under three weeks away from a fun girls’ weekend at Disney World for Princess Half Marathon weekend.  Just because I’m away doesn’t mean that I can let all of my goals go out the window though.  Yes, I want to enjoy a couple of treats while I’m there, but I also don’t want to completely undo all of the progress that I’ve already made with my weight loss.  The last thing that I want to do is return home and feel like I’m starting all over again.

QOTD: What are your goals for February?

I’m linking up for the Friday Five 2.0 linkup.  Many thanks to the wonderful ladies at Fairytales and Fitness and Running on Happy for hosting! 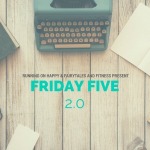