Two weeks ago I ran my first marathon.  After 18 weeks of hard training I had done all that I could to prepare for my first attempt at running 26.2 miles.  Overall, my training went really well, and I felt really prepared going into race weekend.  Even though I did cross the finish line, I unfortunately wasn’t able to run the race that I had hoped to. The morning of the Chicago Marathon I woke up about 15 minutes before my alarm went off, full of excitement but also nervous about what lie ahead of me that day.  After showering and getting dressed I was on my way to the closest L stop by 5:30 that morning.  On my way to the L stop I ate the bagel with cream cheese that I had saved from the hotel’s continental breakfast the day prior, and also started hydrating with water.

My family and I stayed just off of the Magnificent Mile, which meant that I only had about a 10 minute ride on the L that morning.  After getting off the Red Line at the Harrison stop, I walked less than two blocks to the closest Starbucks so that I could get a Chai tea, my go to caffeine source.  Starbucks was almost empty, and I was in and out in less than five minutes.  With my tea in hand, I made the five minute walk to the Ronald McDonald House Charities hospitality tent, which was located on Michigan Avenue just outside of the southern most security checkpoint for the race.  Inside the tent I had a piece of toast with peanut butter to get some protein into me, as well as a banana. 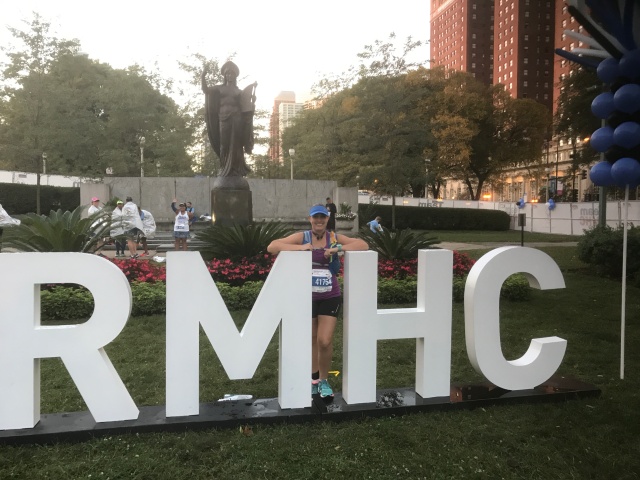 Excited to run on behalf of RMHC!

While I ate the second part of my breakfast, there was no denying the enthusiasm that was present in the tent.  The DJ helped get everybody ramped up for the race, and the Team RMHC team leader provided us with last minutes words of motivation.  I took advantage of the private porta potties available to Team RMHC runners, and then right after taking a team picture at 6:45 I met up with my friend Kathleen outside of the tent. 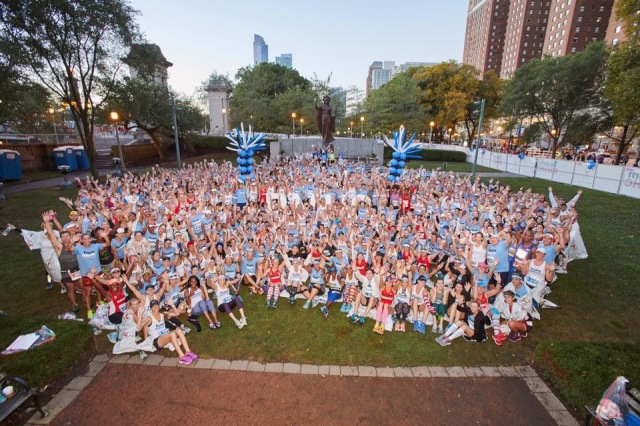 Kathleen, her mom, and I made the short walk north on Michigan Avenue to security checkpoint 1, which was the recommended access point for our corral, corral H.  We said our goodbyes to her mom, and then stood in what seemed like a non moving security line.  Given the recent shooting in Las Vegas, it wasn’t surprising that security was very thorough that morning, but we were anxious to get through the checkpoint and to get in line for a porta potty.

While in line for a porta potty, we watched the time tick away.  The entrance to our corral was set to close at 7:45, and since corral H was the last corral in our wave we were anxious about ensuring that we made it into the corral in time.  I was able to use the porta potty one last time and then we bolted for our corral, getting into it right at 7:45.  Talk about a close call!  We slowly moved towards the start line, and at 8:21 finally crossed the start line.  I was off running my first marathon! 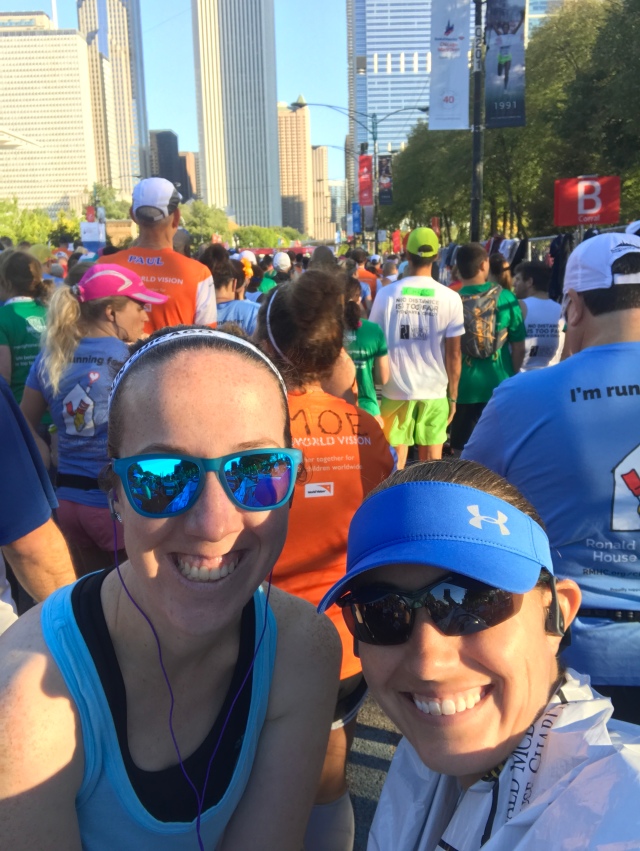 Kathleen and I ready to cross the start line in Chicago

Kathleen and I had planned in advance to utilize the 4:1 intervals that we had each trained doing.  Our plan for the day was to run the entire race together, but since she had a big focus on finishing in less than five hours that I’d give her the go ahead to run ahead of me if I started to struggle.  I honestly thought that we’d be able to run the majority, if not the entire race, together, but unfortunately my body had other plans for me that morning. 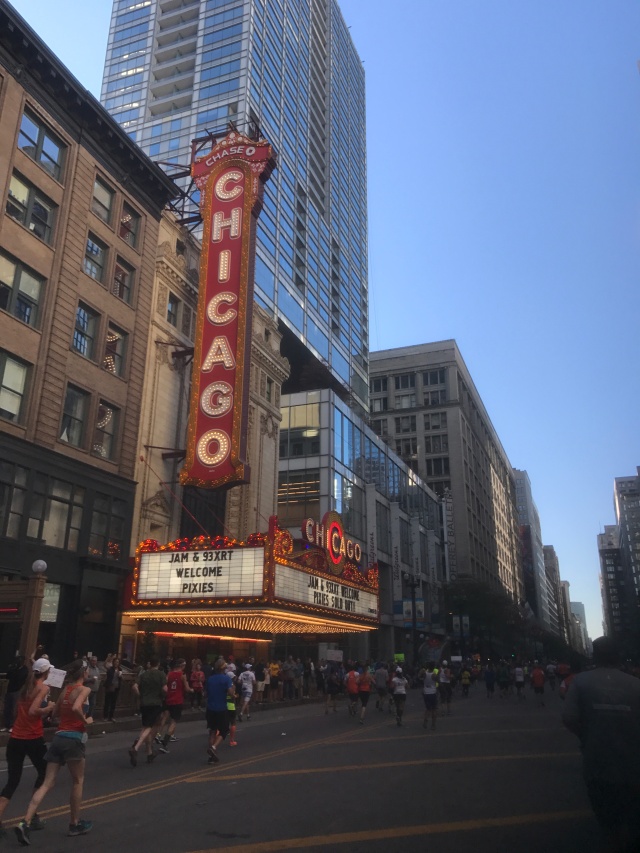 Part of the drive to run faster was because my family had planned for their first cheer point to be between miles 3 and 4.  However, they wound up not being where they said they would be in time, and I missed seeing them.  I let myself get frustrated and upset, which was a huge mistake.  I don’t know if this contributed to the indigestion that I started to develop over the next couple of miles, but I shouldn’t have let them not being there affect me as much as it did.

Over the next couple of miles I struggled to keep up with Kathleen.  For a couple of miles she was just ahead of me on the course, well within my sight.  At almost every walk break she turned around to see where I was, and I eventually gave her to go ahead to run ahead of me.  I was starting to struggle from an upset stomach, and I didn’t want how I was feeling to get in the way of the sub-5 finish that I knew that she desperately wanted.  We wound up getting separated around mile 7.

Despite how I physically felt, the views and the crowds during the first miles of the race could not have been more incredible.  It was a beautiful morning to run (it was sunny and 57 degrees when I crossed the start line), and running past Lincoln Park Zoo and along Lake Shore Drive provided for gorgeous scenery. 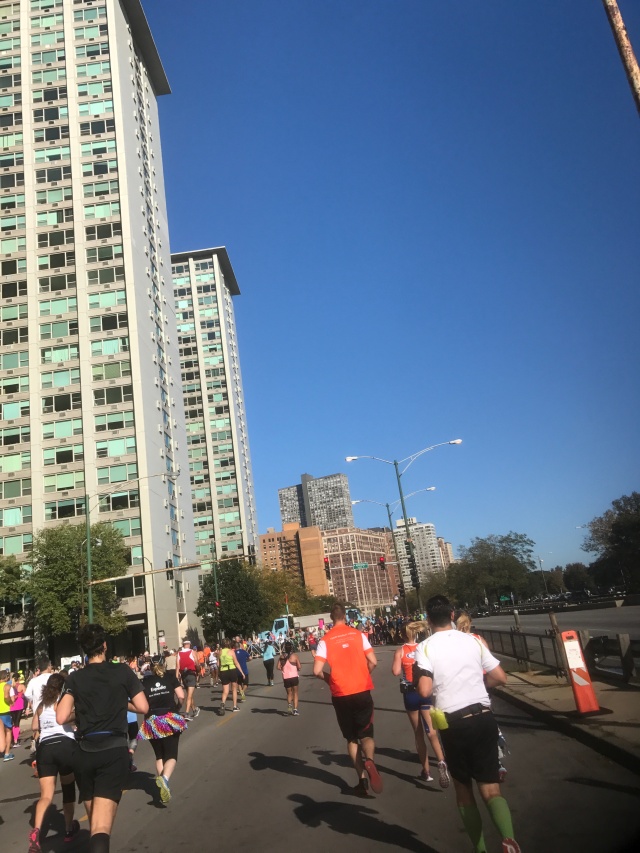 Running north out of Lincoln Park and along Lake Shore Drive

The crowd support as I ran through Boystown and down Broadway during miles 8 and 9 were beyond fabulous, and helped to temporarily distract me from my indigestion.

Just after passing the 15k mark, I knew that I had to stop at a porta potty, and of course there was a line.  I stood in line for about 5 minutes, and wound up standing next to a woman who was pregnant and due in December.  We talked about how her running while pregnant was beneficial, and I shared some of my experiences with her from when I ran while pregnant back in 2015.  I eventually got to the front of the line, took care of business, and was finally on my way again.

It took my body what seemed like forever to overcome the porta potty stop and get back into a good running rhythm again.  Thankfully, my family was at their second planned stop for the day, just past the mile 11 marker.  My husband gave me a couple of packages of fruit snacks, which I was incredibly thankful to receive since I was fearful of using my Gu packets due to my indigestion.  (I wound up only taking two that day, one before the start of the race and one around the 5k point.)  Although I had Clif Shot Bloks in my hydration vest, my stomach was needing something even more gentle.

Seeing my husband, son, parents, and sister, and eating a package of fruit snacks, seemed to give me the push that I needed to find my rhythm again.  Although my pace was slower than it had been in the first miles of the race, I finally started feeling a tad stronger for the first time since my indigestion had started.  The closer that I got to the halfway point, the more confident I was about finishing the race strong.  After crossing the half mark, I was even able to push myself to run a sub 11 minute mile.  I don’t know where that energy came from, but I tried to hold onto it for as long as I could. 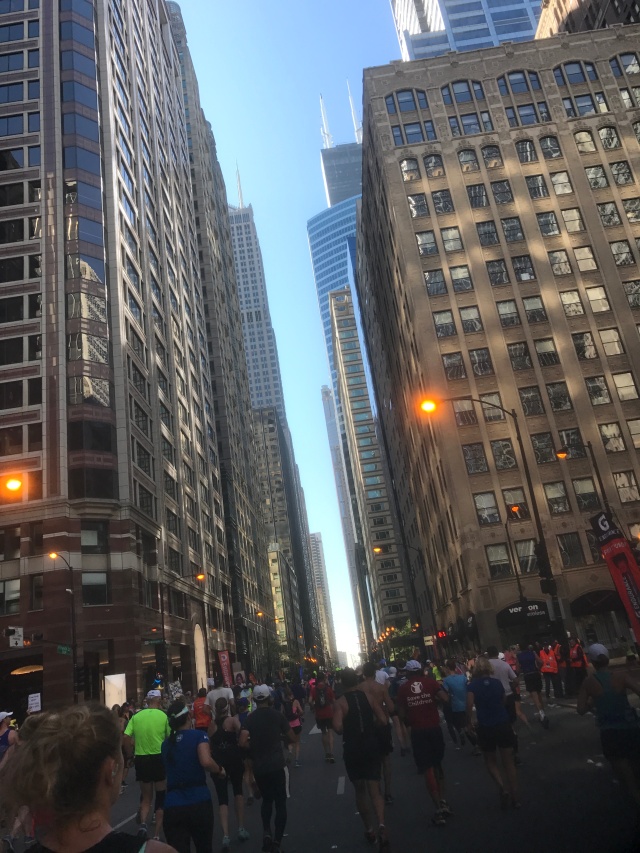 Just past the 20k mark on the course

That mile 14 split was the last fast split that I saw that day.  My tummy troubles started back up again early in the 15th mile, and before the mile 18 marker I had to make another porta potty stop.  I really hate that I had to stop twice during the race, but I really had no other option.  I’m sad and disappointed because I had been able to complete several long runs, including my 20 miler, without any bathroom stops.  But I couldn’t control my indigestion and there was no way around it, I had to stop.

In addition to my indigestion, my legs also started to tighten up around mile 17.  This slowed me down even more.  At this point, all I kept telling myself was that Tammy never gave up during her cancer fight, and that I couldn’t give up either.  I kept putting one foot in front of the other, and drew on the enthusiasm from the crowd to help me keep going.

By this point, the sun was shining brightly and the temperature was in the 70s.  I was incredibly thankful for the couple of “sponge stations” that had been set up along the course.  In addition, a couple of Chicago fire trucks were brought out and the hoses were connected to fire hydrants.  Wiping myself down with the sponges and running through the mist from the fire truck hoses was incredibly refreshing.  Some spectators were also handing out small water bottles.  Even though I had water in my vest, and there were more than enough water stations along the course, drinking the very cold water from the water bottle that I received really helped in quenching my thirst. 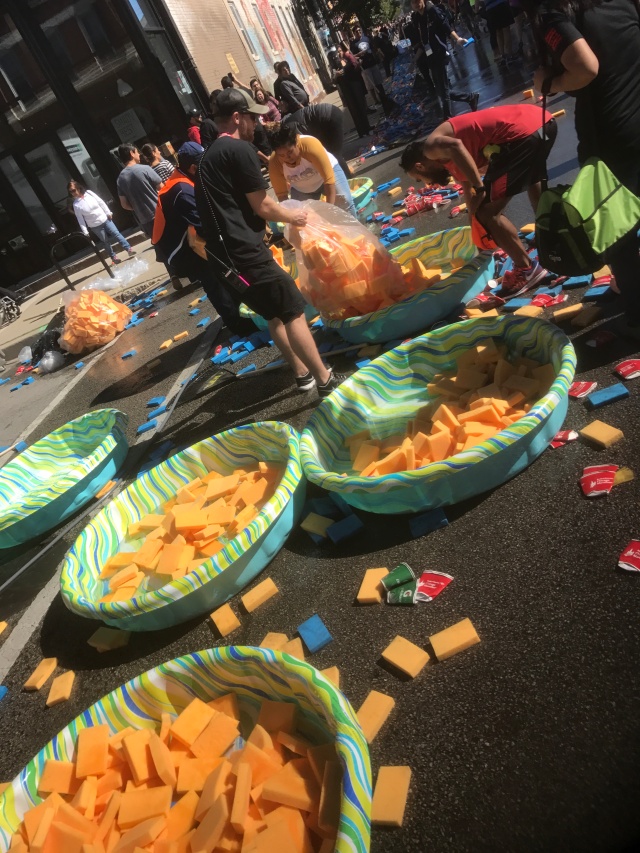 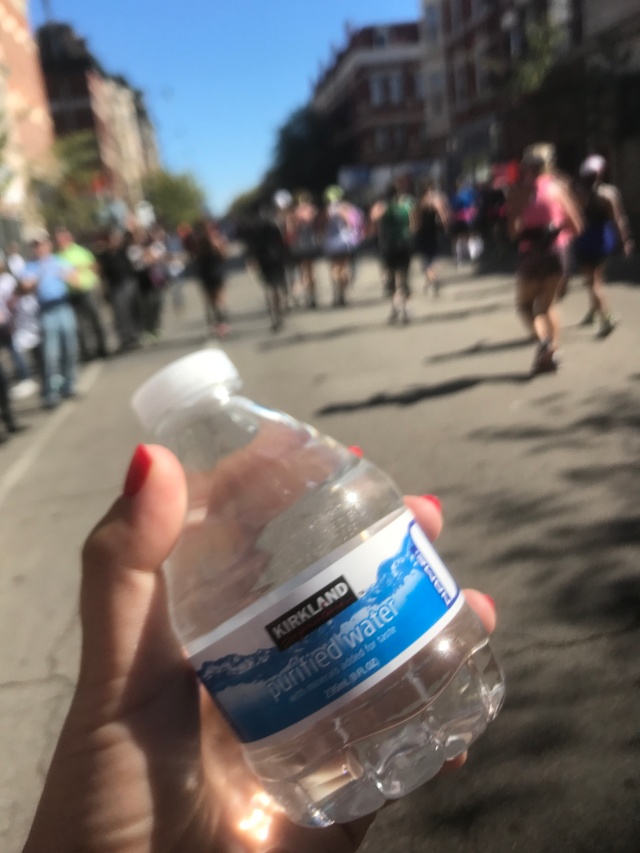 The cold water was incredibly refreshing with how hot and sunny it started becoming late in the race.

Right at the mile marker 21 my husband and sister were there cheering, and I received another couple packages of fruit snacks.  My sister snapped a quick picture of me in front of the mile marker, since it was at that point that I had hit my farthest run ever. 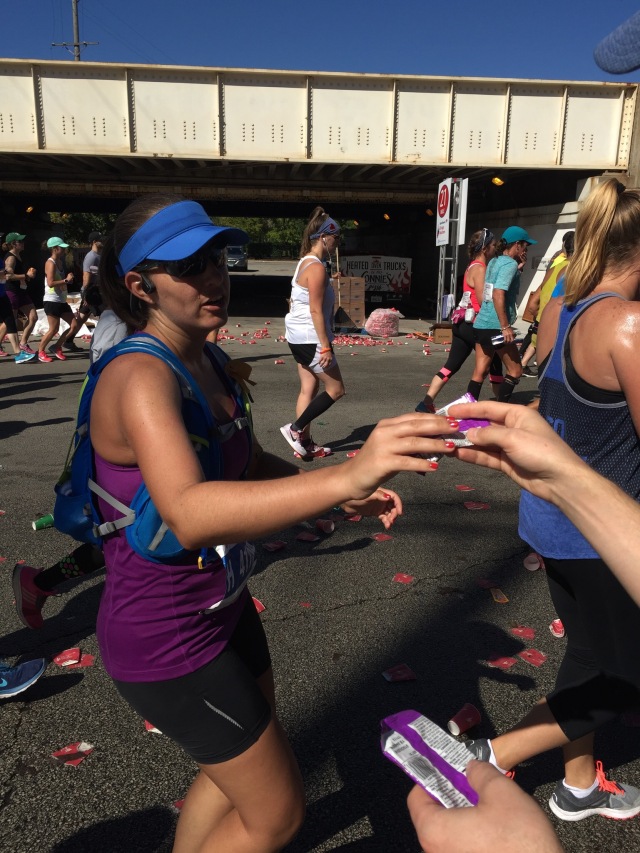 Receiving some much needed fruit snacks from my husband 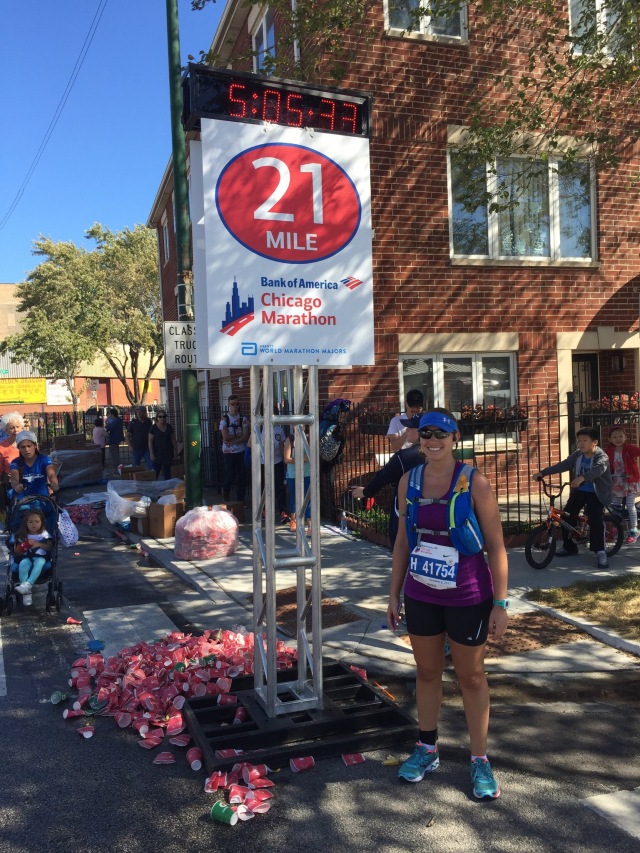 Celebrating one of many milestones for the day

After saying goodbye to my husband and sister I very shortly afterwards arrived in Chinatown.  I had a blast running through Chinatown, where the crowds were slightly bigger than they had been since leaving the heart of downtown at the half mark.  In Chinatown I got a banana from a food station (the two stations prior had been completely out of bananas), and continued to push myself as much as I could. 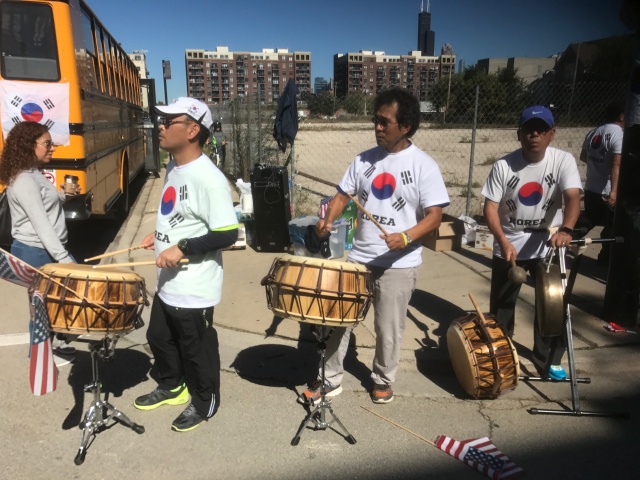 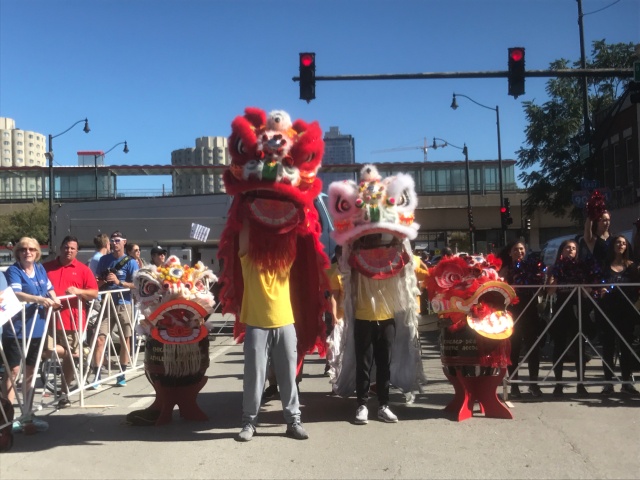 You know you’ve arrived in Chinatown when… 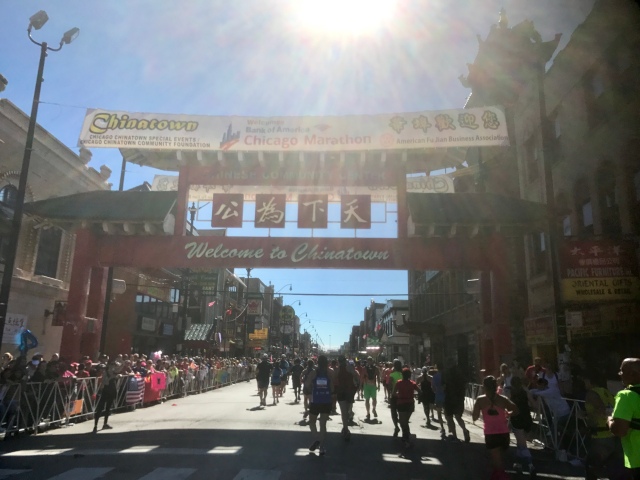 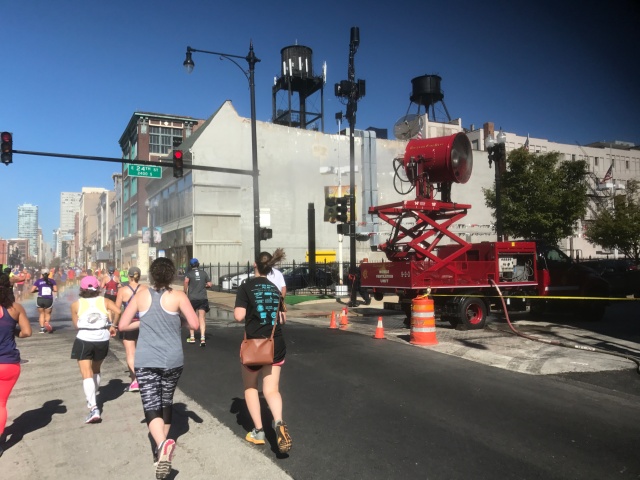 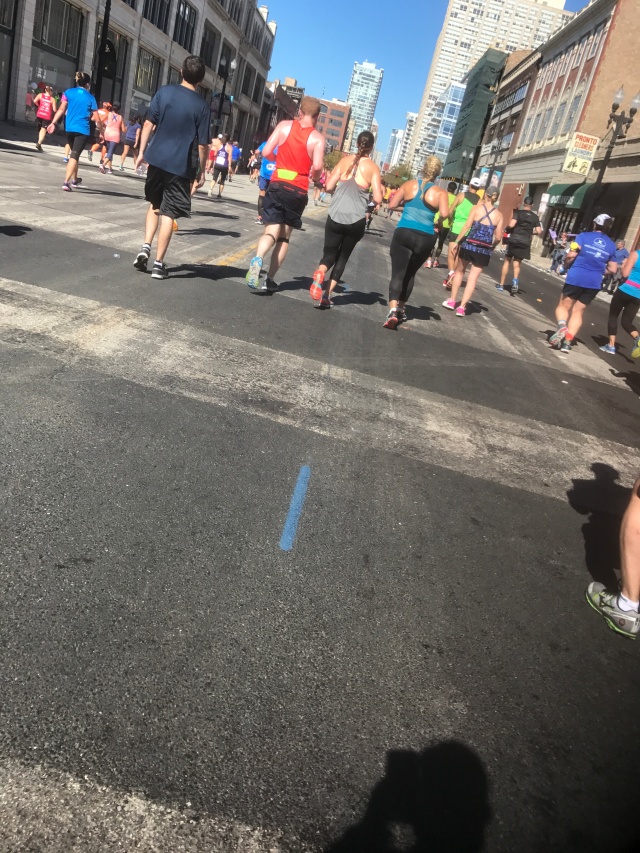 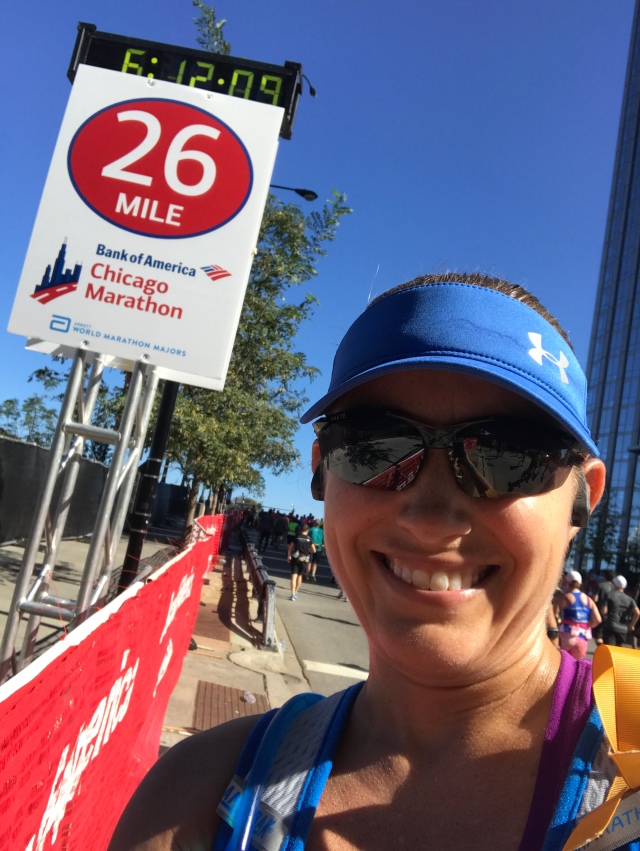 Just 0.2 miles away from crossing the finish line of my first marathon

I crossed the finish line of my first marathon at 1:44 p.m.  My official finish time was 5:23:35 (12:31 pace), though according to my Garmin, which paused during my two porta potty stops, I ran 26.98 miles in 5:13:27 (11:37 pace).  Given the indigestion that I faced during the race, and knowing that I pushed through the best that I could, I cannot be disappointed in myself.  After all, I ran a freaking marathon, and my Garmin pace was right on track with my average pace during my longest training runs.

After I crossed the finish line, I was excited to meet up with my husband and sister (my parents had taken little man back to the hotel for a nap), relax, and refuel.  After eating some lunch inside the RMHC tent, changing into dry clothes, and getting a massage, we made our way back to the hotel to meet up with my parents and little man.  We had a big milestone to celebrate! 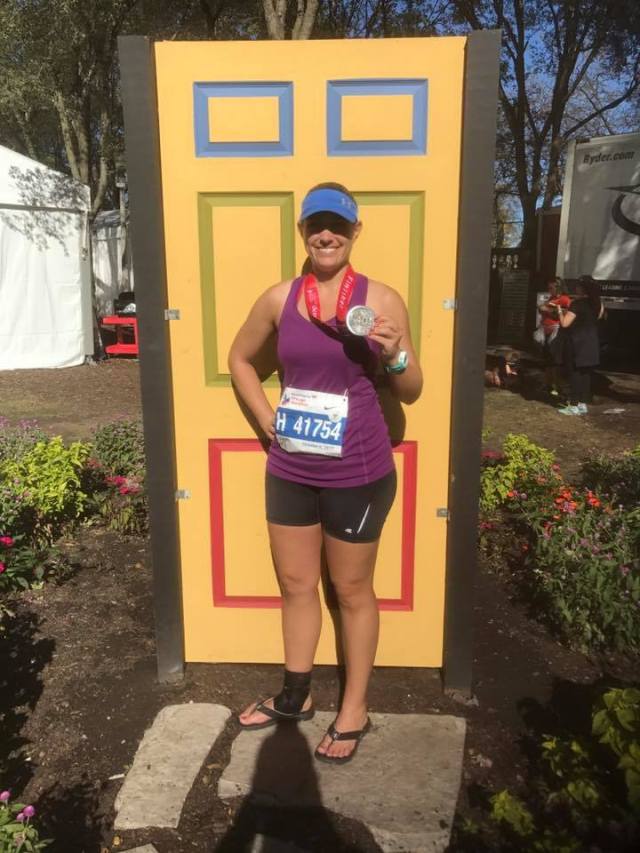 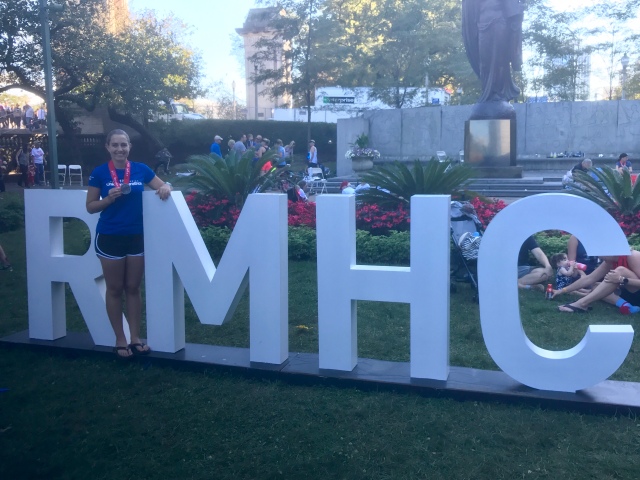 I had nothing but an incredible experience running with Team RMHC

QOTD: Have you ever dealt with indigestion during a race?  What did you do?