The Day Before My First Marathon

Since we flew into Chicago midday on Friday, and the marathon was on Sunday, we had a full day in Chicago before the big race.  Even though I had 26.2 miles to run the next day, we kept quite busy the day before my first marathon, and I wound up walking over 5 miles that day.  I was on my feet way more than I wanted to be, but such is life with an active toddler.

First on my priority list for the day was checking out the finisher merchandise at Niketown.  After seeing on social media the day before that the finisher gear would be available at the Nike store starting Saturday morning, I made it a point to get there as early as I could.  I thought that getting there shortly after opening (8 a.m.) would result in an empty store, but to my surprise there was a shake out run that started at 9 a.m.

Even though I was initially disappointed about the crowd that I found at the store, I was excited to find out that Paula Radcliffe was there for the shakeout run.  Nike coaches did a short interview with her to kick off the run.  It was incredibly motivational to get some last minute marathon advice from a world record holder.

Once the shake out run started the store emptied out and it was much easier to browse the finisher merchandise and take advantage of the photo ops available there.  There were three finisher items: a jacket, half zip, and t-shirt.  My favorite of the three was the half zip, though I wish that it had been available in a color other than black.  After purchasing my finisher item, and taking lots of pictures, I headed back to our hotel, which was conveniently right around the corner from Niketown. 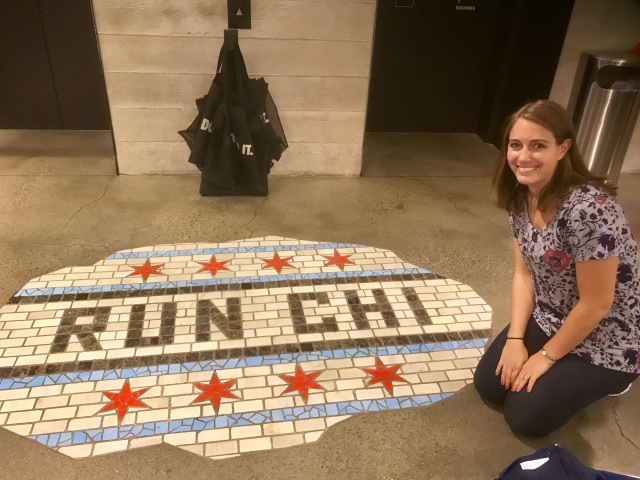 Although we had initially planned to take little man to the Chicago Children’s Museum Saturday morning, my mom, sister, and I decided that since the weather was as beautiful as it was (it was sunny and in the 70s) to instead take him to the children’s play garden at Maggie Daley Park.  He had an absolute blast!  During our walk between the L stop at the park we passed by the start line of the race.  Seeing the start line made me that much more excited for the next day.

After leaving the park we met up with my husband and dad, who had stayed behind at the hotel to get some work done, for pizza at Gino’s East, one of the famous Chicago deep dish pizza restaurants.  The pizza did not disappoint, and it was a delicious way to fuel up for the marathon the next day.

After lunch we all headed back to the hotel since it was little man’s nap time.  I also wound up taking a nap, an over two hour nap to be exact.  I cannot remember the last time that I napped for that long, but it was a great way to relax and rest up for the next day.

Since I wanted a lot of protein the night before the race, and one of the things that Chicago is known for is its steakhouses, we decided to head to a steakhouse for dinner.  Little man wasn’t feeling well that evening (it turns out he was in pain from the beginning of yet another double ear infection), so my sister and I took turns entertaining him out in the lobby.

Reading with my little man in the restaurant lobby

After dinner, we walked back to our hotel, and after putting little man to bed I prepared my gear bag for the next morning.  After taking my flat Kathryn picture, I headed to bed, excited and anxious about the next morning.

Flat Kathryn ready to run the streets of Chicago!

QOTD: What do you prefer to eat the day before a goal race?

This entry was posted in Races and tagged Chicago Marathon, first marathon. Bookmark the permalink.

31 Responses to The Day Before My First Marathon