Monday was a monumental day.  Not only did I secure a new 10k PR for myself at the Ringing in Hope 10k (which I will recap once I receive my race photos), but it was also the 50th race that I have run since I started running back in 2013.  For somebody who thought that they were not cut out to be a runner, I am quite proud of having run as much as I have over the past four years.  And I’m excited to celebrate this milestone by running my 51st race, and 13th half marathon, tomorrow morning at ZOOMA Annapolis.

Over the past four years I have run:

In addition to the races that I have run, I have also walked an additional two.

Since I love taking trips down memory lane I thought that it would be fun to recognize some of my most significant race experiences.

Not only was the Disney World Half my first half marathon, but it was also my goal race when I first set my sights on starting to run.  Preston ran the entire race with me (he ran the race as part of the inaugural Dopey Challenge), and I will never forget holding his hand as we crossed the finish line together.

Crossing the finish line of my first half marathon in January 2014.
Photo Credit: MarathonFoto

Rock ‘n’ Roll DC is well known for its challenging course.  But that is not why I’m recognizing it as my most challenging race to date.  The weather for this year’s race was downright brutal, with the temperature in the 20s during most of the race, and the wind chill in the teens.  I am not a fan of the cold to begin with, and running a race in such cold air was definitely a test of my endurance.

ZOOMA Annapolis was the first half marathon that I fully ran after giving birth to my son.  At just over five months postpartum, I took to the hilly streets of Annapolis on an incredibly hot and humid morning.  I could not believe how strong I felt throughout the race, and that I managed to PR that morning.  My hard work and persistence during my postpartum recovery definitely paid off that morning.

After crossing the finish line at ZOOMA Annapolis last June

Most Fun Race: Wine and Dine Half Marathon – November 2016

When I run races at Disney World, I run them with zero time goals in mind, and 100% focus on having fun.  Preston and I had a blast running Wine and Dine last year, and stopped at almost every photo opportunity along the course. 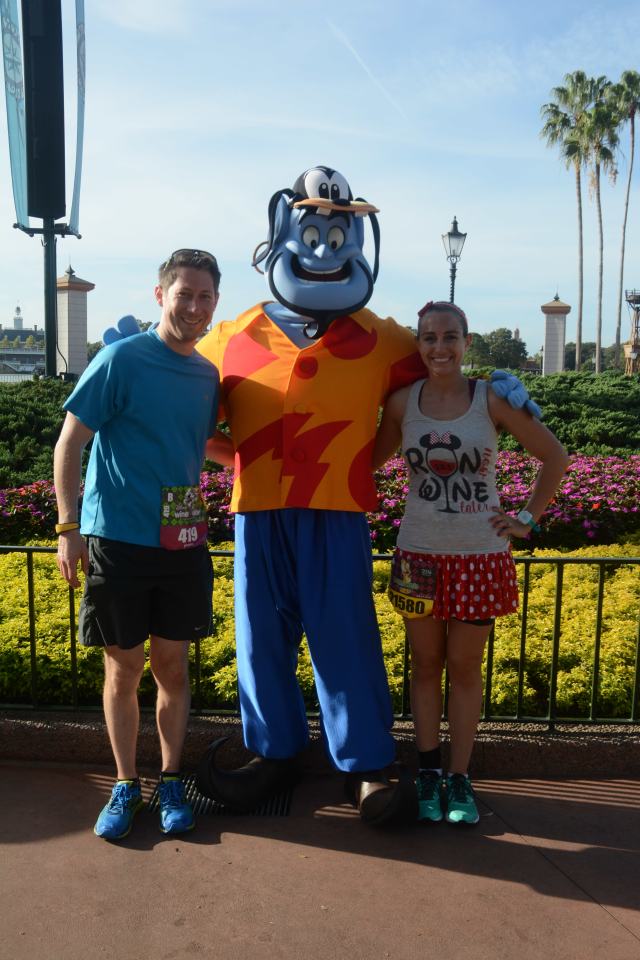 Each of these races was challenging for very different reasons.  I ran Shamrock less than two months after a major car accident that left my car totaled and me with a back injury.  But I pushed through, and with the support of the chiropractor that I started seeing after the car accident managed to still train for Shamrock.  Despite the back pain that I had during the race, I still managed to cross the finish line upright, and with a new PR.

After finishing the Shamrock Half Marathon

I ran/walked Rock ‘n’ Roll Philly at 32 weeks pregnant.  Completing all 13.1 miles at RnRPhilly is one of the most physically challenging things that I have ever done.  My pace slowed significantly the further that I ran/walked, but I did it.  The baby and I earned our medal that day!

QOTD: What race are you most proud of having finished?

I’m linking up for the Friday Five 2.0 linkup.  Many thanks to the wonderful ladies at Fairytales and Fitness and Running on Happy for hosting!