Unfortunately, illness continued to be the theme this past week.  And when you’re sick, everything else in life is unfortunately affected.

After struggling to complete Sunday’s 10k, my body was screaming for rest on Monday.  I felt miserable, and was so tired that I had to take a midday nap.  There was no working out for me on Monday.

I was still coughing, and my congestion was also in full force.  It was another rest day for me.

I finally felt well enough to get outside for a walk.  Since the weather was incredibly unseasonable (the high was in the mid-60s), it would have been a crime to not get outside and enjoy the weather.  Preston and I took both little man and Riley for a family walk.  We all needed, and enjoyed, the fresh air. 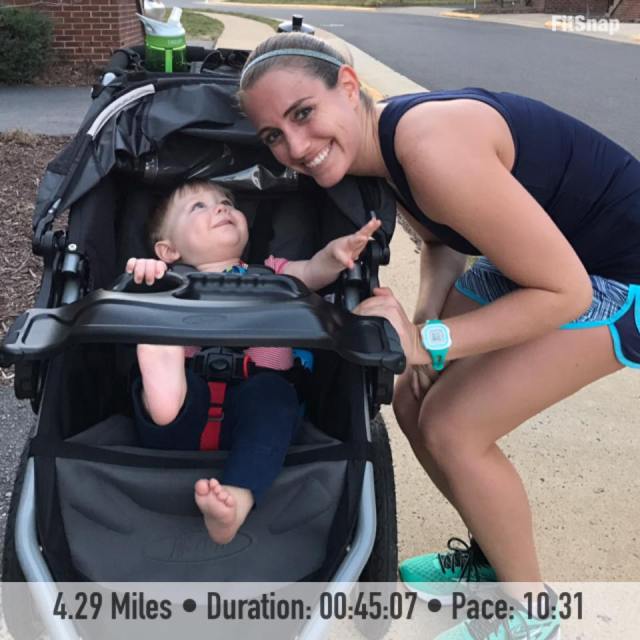 Another 75 degree afternoon called for a walking commute to pick up little man from daycare.  Enjoying a 2.5 mile walk in the sunshine and warm air was just what I needed at the end of a long week of being sick.

I had 14 miles on tap for my last double digit training run before Rock ‘n’ Roll DC.  I headed out the door just before 9 a.m. knowing that I needed to beat an incoming thunderstorm.  Even though I was still dealing with my cough, and ran on a fairly hilly route, I felt strong during the first four miles of my run and ran strong splits: 10:29, 10:14, 10:24, 10:23.

I was never able to recover after that longer walk break, and found myself needing to walk more and more frequently.  At one point the wind started blowing at about 20 mph (according to The Weather Channel app) and I have no idea what some of the gusts were.  Between my chest congestion, the hills, and the wind, I became more and more defeated the further that I ran.  I texted my friend Kathleen on and off during the run, and while her texts were initially helping me to stay motivated to keep going, I decided at 12 miles that I just couldn’t fight anymore.  The further that I ran, the slower that I ran, and I just couldn’t fight anymore.  My splits for the last five miles were: 11:22, 11:07, 11:01, 12:34, 12:23.

I was so glad to be done with Saturday’s run, even though I was disappointed that I cut it two miles short

I’m so disappointed that I couldn’t finish the last two miles that I had planned.  I’m trying to not be too hard on myself, since I know that I’m prepared to run a half marathon in two weeks.  But its not like me to not finish my planned mileage.  What I do know is that I did the best that I could.

I finished out the week with a 15 minute strength training session, focusing on abs and lower body.

QOTD: How do you rebound from a physically and mentally challenging run?