Unfortunately, illness has plagued our household again.  It started with just little man getting sick, and now I’m sick too.

My body was still feeling sore from my 12 miler the Saturday prior, and my lower back and right shoulder were really bothering me, so after my weekly chiropractor visit I decided to take an extra rest day.  I’m so glad that I listened to my body because my body needed the extra rest.

After some slower than usual weekday runs last week, I was able to push my pace a bit during Tuesday’s run.  Not only was it a great run because I felt like I was flying, but I also set a new weekday personal distance record and ran 4.81 miles in 45 minutes.  Although my pace wasn’t entirely consistent (9:39/9:13/9:22/9:26/7:21 last 0.81 miles), I was definitely celebrating the 9:22 pace post run.  I capped off my run with 15 minutes of strength training.

Celebrating a great run by mimicking the flying feeling

I had to take another unplanned rest day on Wednesday after getting the dreaded phone call from little man’s daycare that he was fussy, had a fever, and needed to be picked up.  One visit to the pediatrician later revealed why he wasn’t himself: he had yet another double ear infection. 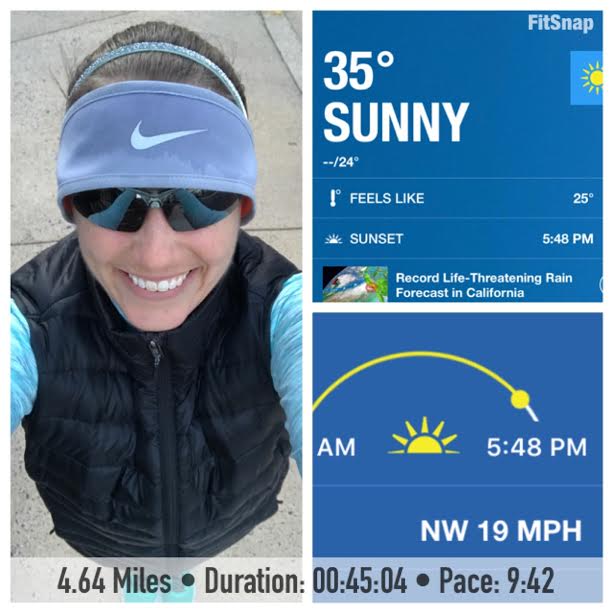 Not only was it windy for Thursday’s run it was also cold. Is it Spring yet?!?

After work I headed to the gym where I spent 30 minutes on the elliptical and 25 minutes doing a total body weight training workout.  It was a great way to kick off the weekend.

Saturday morning we packed up and drove to New Jersey to spend the long weekend at my father-in-law’s house.  During the drive up I started coughing a lot, and was feeling quite tired and achy by later that afternoon.  I decided to put my long run off by a day in hopes that I would feel better on Sunday.

Although I woke up still coughing on Sunday, I wasn’t achy and decided to attempt my run.  It was a mentally and physically challenging 10k, but I pushed through and earned my ZOOMA Run Love Challenge medal.  Since I wasn’t feeling 100% my pace was definitely slower than usual.  The silver lining was the weather though.  How often is it sunny and in the mid-60s in February, and you get to run in a tank top outside?  The weather definitely made up for how I felt both during and after the run, as well as my slow pace and splits (10:14/10:15/10:10/10:33/10:26/10:45/2:05 last 0.2 miles).  I was so glad when I was done with my run, and unfortunately by Sunday evening I was feeling achy again.  I doubt that I’ll get all of my workouts in this coming week, particularly during the early part of the week, if I’m still feeling sick.

Don’t let my smile fool you. I was not feeling well during or after my run.

QOTD: How has the weather been in your area?  Does it feel more like Winter or more like Spring?