Posted on September 26, 2016 by Kathryn @ Dancing to Running

Disclaimer: As a Rock ‘n’ Blogger I received a complimentary global tour pass, which I used for entry into this race.  I also received complimentary VIP access.  As always, all opinions are my own.

Summer training is hard, and each year when I decide on a fall half marathon to train for, I often question my decision at some point in the midst of my summer training.  This year was no exception, particularly since with an infant there were many days that I had to complete my run at an unideal time when it was hot and/or humid (ie: not first thing in the morning).  But it was exciting to see my hard work and perseverance pay off last Sunday at Rock ‘n’ Roll Philly.

Race weekend started off early Saturday morning when Preston and I packed the car with little man and our dog for the three hour drive north to my father-in-law’s house in South Jersey.  Once we got there and ate lunch, I headed across the Ben Franklin Bridge into the city to the expo.  I had hoped to make it to the We Run Social meetup that afternoon, but the timing of our arrival and my need to get back for a family dinner just didn’t make that possible.  Luckily, there was almost no traffic, and the expo wasn’t very crowded, so I was able to park, get my bib, briefly wander the expo floor, and get back to my car, all in about an hour. 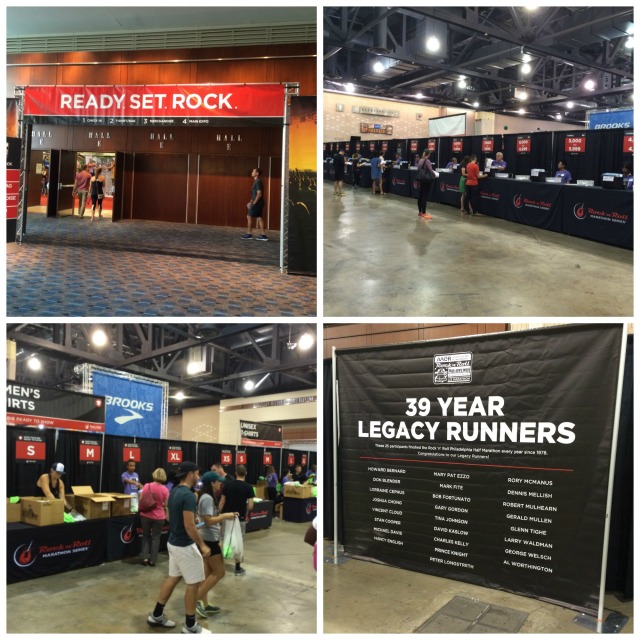 Scenes from the expo

Ready to run the streets of Philly!

The next morning, I was up well before anybody else in the house to shower, pump, and get dressed.  I left the house just after 6 a.m., and once again didn’t hit any traffic as I crossed the bridge and made my way back into the city.  Just like last year, I opted to prepurchase a parking pass in order to help with race morning stress.  Once I parked near the convention center, I made the approximately one mile walk towards the start line at Eakins Oval.  Since I had VIP access for this race, I headed towards the VIP area, where after dropping off my gear bag I ran into Janelle and Michelle.  After talking for a few minutes, we headed towards the steps of the Philadelphia Art Museum for the morning’s We Run Social meetup, where I finally got to meet Dani and Jenn.

The breakfast spread in the VIP area before the race

We Run Social runners ready to take on the streets of Brotherly Love Photo Credit: Dani from Weight Off of My Shoulders

The view of the staging area from the top of the Art Museum Steps. It was quite hazy and humid that morning!

After the meetup, Janelle and I headed back to the VIP area to use the porta potties (yay for no lines!), and I grabbed myself a bottle of water before heading towards the start line.  I was in Corral 10 for this race, and although the corral was crowded by the time I arrived at 7:25 a.m., I easily found a comfortable spot for myself towards the back right corner.

At 7:30, the Rocky music was played to signal the start of the race (it was quite fitting for the city that we were in), and around 7:45 a.m. I crossed the start line.  The first 5k of the race weaved through the downtown area, and the course went towards and then around city hall.  This part of the course was quite congested, not just because of it being the beginning of the race, but also because the streets are a bit narrow for a race of this size (there were over 30 corrals of runners).  I struggled to find my groove, and didn’t really settle into a comfortable rhythm until about mile 4 when I was running down Fairmount Avenue towards the Schuylkill River.

The further that I ran, particularly during the eight mile loop around the Schuylkill, the more I had flashbacks to last year’s race.  The further that I ran, the more I kept asking myself how I completed this race at 32 weeks pregnant.  Although the weather this year was drastically different from the cool morning we had last year (this year it was cloudy, in the low 70s, and 100% humidity), and its a fairly flat course once you finish the first five miles, completing a half marathon isn’t the easiest task out there.  With each set of porta potties that I passed, I had flashbacks to stopping at what seemed like every single one of them last year.  While the humidity this year was far from ideal for running a strong race, in many other aspects running it this year was significantly easier.

As I made my way back towards the Art Museum and Eakins Oval during the last couple of miles of the race, the humidity really started to take its toll on me, and I found it increasingly difficult to push myself the way that I had wanted to during the last couple of miles.  During the last mile of the race, I noticed that several other runners were also having difficulty, and there was a woman passed out in the middle of the road.  Several other runners had stopped to help her, and because a medic hadn’t gotten to her yet, I opted to continue running in hopes of finding a medic to alert.  A short time later, I did see a medic, who appeared to be aware of the situation and was making their way towards the woman in need of help.

The race ended on an uphill in front of the steps of the Art Museum.  As I neared the finish line, I tried my best to push myself as hard as I could.  As I looked at my Garmin, I knew that I had secured a PR for myself, but I couldn’t remember exactly what my time goals for this race were.  I crossed the finish line at 2:15:42 (10:22 min/mile pace), which was a mere 14 seconds short of meeting my C goal.  I know that the goals that I had set for myself were quite ambitious, and had it not been so humid I might have been able to push myself a tad harder during the race.  Nonetheless, I PRed by almost three and a half minutes, which was definitely worth celebrating.

All smiles because of my PR!

After I got my medal I made my way through the finisher’s chute and back towards the VIP area, where I enjoyed a delicious brunch and a couple of mimosas.  While I was finishing up, Janelle found me.  It hadn’t been her morning either, but we chalked it up to the humidity having had a huge impact on both of us.

The VIP perks for this race were absolutely incredible, and included a delicious catered spread, bar with mimosas, beer, and soda, private porta potties, and a charging station.  There were also complimentary massages, which I opted to not take advantage of due to the long line and needing to get back to my father-in-law’s house.

Despite the humidity, it was another great morning for a race.  I’m happy that I got the chance to run this race a second time to see what I was capable of accomplishing.  Its a beautiful course, with lots of crowd support.  It was another great Rock ‘n’ Roll event, and I can’t wait until the next one.

QOTD: How do you do with running in the humidity?