Thoughts on this Year’s Wine and Dine Half Marathon

Back in March, Preston and I registered for this year’s Wine and Dine Half Marathon.  That was about six weeks before we found out that we were pregnant, and when we calculated the weeks we realized that I’d be 33 weeks pregnant during this year’s race.  Although I ran/walked Rock ‘n’ Roll Philly at 32 weeks pregnant, we didn’t want to plan an expensive racecation for a race that I would have had to walk the majority, if not all, of.  The cost of the two races was a huge difference in why I still participated in Rock ‘n’ Roll Philly (which I participated in for free as part of my participation as a Rock ‘n’ Blogger this year).  After fees, our race registration for Wine and Dine was over $200/person, and we didn’t want to feel like we wasted money on a race that we would wind up having to walk.

So we deferred the race.  It wasn’t a difficult decision, but one that we wish that we hadn’t had to make since we had been looking forward to registering for this race for so long.  Throughout the race weekend this past weekend, the more that I saw everybody’s pictures on social media the more that I longed to be there.  Ever since running my first half marathon at Disney in January 2014, I’ve been eager to participate in another runDisney race weekend, and seeing the Christmas at Disney pictures had me reminiscing about our Christmas vacation there last year.

Crossing the finish line of my first half marathon!
Photo Credit: MarathonFoto

Due to pregnancy insomnia, I’m not sleeping currently sleeping through the night.  Saturday night I woke up around 11:45 p.m. to a number of runDisney Twitter alerts on my phone.  It was then that I first learned that the start time of this year’s Wine and Dine Half Marathon had been delayed due to inclement weather, and that the course had also been shortened to about 6.7 miles.  Many on social media started nicknaming this year’s race “The Wine and Dine Half of a Half Marathon.” 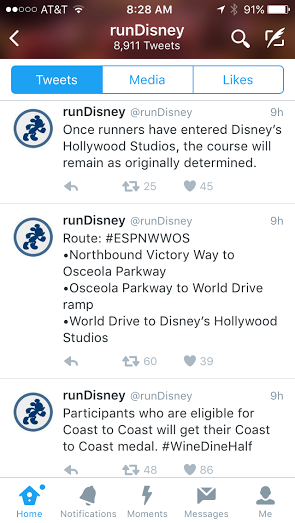 Some of the tweets that runDisney tweeted Saturday evening

The course started at ESPN Wide World of Sports, and normally would have taken runners on an out and back on Osceola Parkway, with a brief run through Animal Kingdom.  Instead, the out and back on Osceola Parkway was eliminated, as was Animal Kingdom, and runners instead were rerouted to run on World Drive to Hollywood Studios, where they ran the rest of the originally planned race, which ended at Epcot.

There’s lots of speculation as to why the course was shortened.  There was a threat of additional thunderstorms in the area between 1 and 2 a.m., when many runners would have still been on the course.  I also read about downed tree limbs on the course in Animal Kingdom.  There was discussion that the medical and security staff were only contracted until a certain time, and that by delaying the start of the race until 10:45 p.m. that these staff would have been working beyond their contracted time.  There was also discussion as to where runDisney would direct runners to that were on Osceola Parkway in the event of a second thunderstorm, and how those runners would be safe from Mother Nature.  And lastly, it was mentioned that the roads had to be reopened by 2 a.m., which with the delayed start wouldn’t have allowed for the maximum 16 minute/mile pace that runDisney offers its participants.

I’d like to believe that those are the reasons for the tough decision that runDisney had to make.  I’m trying to not believe the complainers who have argued that runDisney cut the race short in order to ensure profits for Disney at the race after party at Epcot, which still went on as planned.  That thought never crossed my mind until I read about it in several of the runDisney Facebook groups that I belong to.

Several people are naturally upset about the course being cut short, especially those for whom this would have been their first half marathon.  I’ve been trying to think about how I would have felt had Preston and I been in Florida for this race as originally planned.  Of course, I would have been disappointed about the weather’s interference with the race, but nobody can control Mother Nature’s ways.  Its hard to even begin to put myself into the shoes of those who had signed up for this race as their first half marathon, and just how disappointing it would have been to not be able to complete this race as planned.  But the reality is that safety comes first, and I would never want a race organization to put my health and safety in jeopardy just so that the show could go on.

Wine and Dine wasn’t the only race that had to have last minute changes made.  Earlier in the day on Saturday, Rock ‘n’ Roll Savannah’s full marathon course had to be cut short due to unseasonably high temperatures and humidity.  Given that a runner passed away during the race, it seems to me like Rock ‘n’ Roll made the right decision on Saturday.

Is there one “right” answer to when the weather doesn’t cooperate?  Of course not.  runDisney has their zero refund policy stated on multiple pages on their website, and they could of course have made the decision to cancel the race altogether.  But they didn’t.  They made adjustments, still passed out medals at the finish line, and honored this race as originally planned for the Coast to Coast Challenge.  Some said they had difficulty wearing and/or displaying their medals since they didn’t complete a half marathon, but many would have also complained had they not distributed any of the medals.

Since I wasn’t there, I haven’t been able to come to a 100% conclusion on how I would have felt had Preston and I been there as originally planned.  Sure, it would have been a disappointment to not complete the race as planned, but at the same time, health and safety always come first.  And for that reason, I support the decision that runDisney made to shorten the course.

This entry was posted in Races and tagged runDisney, Wine and Dine Half Marathon. Bookmark the permalink.