Posted on November 9, 2015 by Kathryn @ Dancing to Running

Disclaimer: As a Rock ‘n’ Blogger I received complimentary entry into this race.  As always, all opinions are my own.

Last Saturday morning I completed my sixth half marathon, and my second one while pregnant. You may recall that I ran my first pregnant half marathon in Virginia Beach at 24 weeks pregnant. Although this race was only a short eight weeks later, the two races were drastically different.

My race weekend experience started out Friday afternoon/evening when Preston and I made the drive up I-95 from Northern Virginia to Philly.  With the race expo scheduled to close at 7 p.m., we headed straight to the Philadelphia Convention Center.  Since we had our dog Riley with us, we decided that Preston would drop me off and I would quickly run into the convention center to pick up my bib while he circled around the city streets.

The expo was well organized and easy to navigate.  Packet pickup was a breeze, as was navigating the exhibitors on the expo floor.  Unlike my last Rock ‘n’ Roll experience, I found the exhibitors to be well spaced out and the floor wasn’t crowded at all.  Other than browsing the official merchandise, the only other stop I made was at the Sparkly Soul booth, where I browsed their expo specials and ultimately decided to not purchase anything. 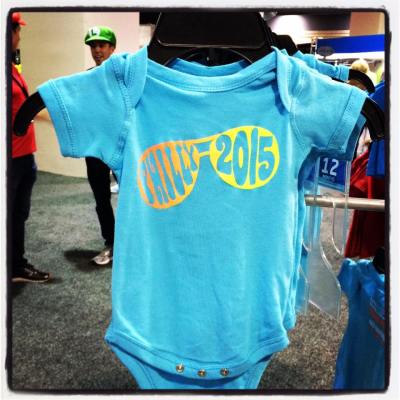 The only official merchandise that caught my eye was this adorable onesie, but given the high price and how quickly babies grow, I decided that the onesie wasn’t worth it

I was in and out of the convention center within 15 minutes, and met back up with Preston and Riley.  We made our way across the Ben Franklin Bridge into New Jersey, as we spent the weekend staying at my father-in-law’s house in South Jersey.  I laid all of my race gear out Friday night, and set my alarm for 5 a.m. with the plan being that Preston, Riley, my father-in-law, and I would leave the house at 6 a.m.  We wound up being a bit late, but the lack of traffic getting back into the city, as well as their ability to drop me off only about two blocks from the start line meant that I still wasn’t late for the race.

Flat Kathryn (and baby) ready for half marathon no. 6 (and no. 2 for baby)

After arriving at the start line, I headed immediately for gear check and then got in line for the porta potties.  I texted Sarah to find out where she and her fiance Matthew were, and it was right after she and I texted back and forth and they were on their way over to find me that my phone died.  And by died, I don’t mean just ran out of battery (it had been fully charged).  I got the blue screen of death on a two week old phone (hence why I don’t have any other expo pictures since I only posted the one of the onesie onto social media).  While I fumbled with the phone trying to get it to turn back on, Sarah and Matthew found me.  It was great to meet up with them and catch up a bit (I hadn’t seen Sarah since Shamrock Half Marathon back in March, and hadn’t seen Matthew since the Disney World 10k back in January 2014).  After a couple of minutes they headed off to find another friend while I continued to wait in line for the porta potties.

While in line, I continued trying to turn my phone back on.  I was devastated for multiple reasons.  My phone was my source of music for the race, and I’m not used to running without music.  But more importantly I started to panic about how I’d get in contact with Preston and my father-in-law after the race.  Thankfully, another woman in line noticed how panicked I was, and offered to let me use her phone to text Preston about what had happened.  Thank you kind lady, I’m not sure what I would have done without you!

After using the porta potty I headed towards my corral.  Since I knew I’d be walking the majority of the race, I lined up on the far right side of the corral so that I could avoid being in anybody else’s way.  The race started at 7:30, and at 8:01 my corral, corral 19, was off and running.

We had a great view of City Hall for the first part of the race, and then weaved through a couple of downtown streets before heading towards City Hall again.  Because of crowding at the beginning of the race, I ran the first five minutes straight, and then started running 1:15 minute intervals, followed by 45 seconds of walking.  After running the first mile, I walked the entire second mile in order to conserve energy.  And it was around 1.5 miles that I heard a familiar voice from behind, a former coworker shouted “I didn’t expect to see you here!” as she ran past me.  It was great to see a familiar face, especially so early on in the race.

At the mile 2 marker I resumed my run/walk intervals, and alternated between running/walking and walking miles for the first 5 miles of the race.  My race plan had been exactly that, and I wanted to stick to it, only letting myself run the last mile of the race if I felt up to it.  I felt good for those first 5 miles of the race, which I’m sure was partly the result of the cool weather that we had on race morning.  I wound up wearing my throw away shirt (my oversized volunteer shirt from last year’s Marine Corps Marathon) until just past the 5k marker, and because I feared that I would get cold later on in the race when I stopped running I tied my shirt around my waist instead of tossing it on the side of the road.

After running my third mile (mile 5 of the race), I focused on walking the remainder of the race.  Although at that point I was feeling pretty good, I didn’t want to jinx myself or prevent myself from being able to finish the race.  As I started walking, I pulled my phone out to see if I could get it to turn on.  It successfully turned on, I quickly texted Preston to let me know my current location, but reminded him to not count on my phone surviving the rest of the race.  And its a good thing we didn’t rely on it, because around 6.5 miles it turned off again.

Shortly after starting to walk the race the course took us along the Schuylkill River, and the remainder of the course was a huge loop along the river.  It was a gorgeous fall morning for a race, and I’m so glad that I had a basic point and shoot camera with me since the scenery was just absolutely gorgeous.  Even though my dead phone made it so that I couldn’t listen to music, I was at least able to take plenty of pictures during the race.

I made my first porta potty stop just before the mile 6 marker, and then stopped again around miles 8.5 and 10.5.  After my last porta potty stop, I noticed that my hamstrings started to tighten up and that I was feeling increased round ligament pressure.  Both of these led to me slowing my pace down a bit, and for a couple of minutes I contemplated stopping at a medical tent and calling it a day.  But then I got my head back in the game, reminded myself that I could do it, and forged forward towards the finish line.

Part of what distracted me during the race, other than the scenery, were the costumes that many runners wore.  With this race being on Halloween morning, many runners took the opportunity to dress up.  I saw several women dressed as Energizer Bunnies, several takes on various super heroes, but my favorite costumes were worn by a group of 5 runners who were dressed as the ingredients for s’mores.

By the time I got to the mile 12 marker I just wanted to be done with the race, and though I was in some pain I decided to resume my run/walk intervals for the last mile of the race.  My “run” was a slow jog at best, but I slowly but surely made my way back towards the Art Museum and Eakins Oval, where the finish line of the race was.  Just before the mile 13 marker we started a sharp incline towards the Art Museum, which was brutal, but I pushed forward as best as I could and crossed the finish line at 3:26:35 (15:46 pace), though according to my Garmin I finished the race in 3:17:25 (and ran/walked 13.30 miles at a 14:51 pace).  Although this was my slowest of the six half marathons that I’ve completed (my second slowest being my first half marathon), this is one of the half marathons that I’m most proud of having completed.  How many people can say that they completed a half marathon at 32 weeks pregnant?

Since I was at the back of the pack finishing the race, the finishers’ chute wasn’t crowded whatsoever.  After I received my medal, I was handed two bottles of water as well as Gatorade, and found that there was still plenty of food left for us slower finishers.  As with past Rock ‘n’ Roll races, I greatly appreciate that they have plenty of food available at the finish line, but its always difficult to juggle everything.  A bag to put everything into would be greatly appreciated!

There was one thing that they were out of at the finish line, which were the heatsheets.  I don’t know if other runners had taken multiple sheets, or if they just didn’t have enough to go around for everybody.  Either way, I was very thankful that I hadn’t tossed my throwaway shirt, because I wound up needing it at the finish line.

Once I exited the chute, I made my way to the Family Reunion area, where I attempted to turn my phone on again.  Sadly, it didn’t turn on, but Preston, my father-in-law, and Riley appeared in the area about ten minutes after I arrived there.  Thank goodness for runner tracking, otherwise I don’t know what we would have done after the race.

All in all, it was a great morning for a race.  I’m so glad that I challenged myself to complete this race at 32 weeks pregnant.  It was a very scenic course, and was relatively flat.  I’d love to have the opportunity to try and run this race again in the future, to see if its a PR worthy course.  While my dead phone and lack of music put a damper on the day, the race wound up not being nearly as bad as I feared it would be when I first discovered that my phone had died.

QOTD:  What is the worst race morning mishap that’s happened to you?