Our Extended 4th of July Celebration

Disclaimer: I received a complimentary virtual race entry.  I was not compensated financially for my participation in this virtual race.  As always, all opinions are my own.

Preston and I enjoyed an extended 4th of July celebration throughout the entire weekend, and kicked it off Thursday evening by running our second virtual race, the All 4 Run Virtual 4 Miler with Gone for a Run.  Because we also ran the Firecracker 5k Saturday morning, I decided that it would be best to complete my four miles on Thursday since it had also been a cut back week in terms of my long run mileage.

So Thursday after Preston got home from work we headed out for our four mile run.  Although it was a bit humid (68%), it was a gorgeous 73 degrees, which made for a rather enjoyable run.  And since I like to run races as fast as I can, I was happy to be able to push myself a bit faster since it was a cooler than usual summer evening. 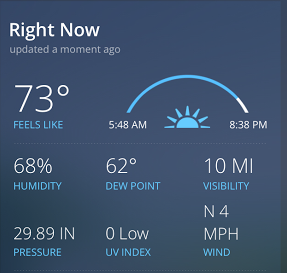 The weather during our four mile run

We decided to run one of our usual routes around the neighborhood, which is an out and back route.  Although there are some hills on this route, its nowhere near as hilly as some of the other routes that we run on are. 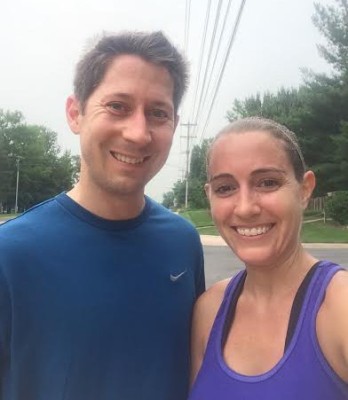 Per usual, I loved being able to run with Preston

We completed the race in 41:43 (10:25 pace).  When we arrived back home, Preston presented me with my medal, just like he did after my last virtual race.  And since it was 4th of July weekend, I made sure to take a post race photo in the post patriotic spot at our house: in front of our American flag. 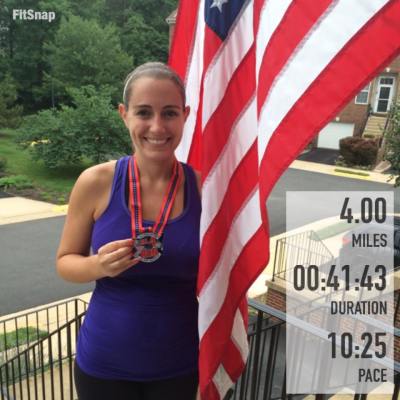 Preston had off from work on Friday, and we spent the day taking care of chores at home as well as just enjoying a relaxing day together.  On Saturday, we kicked off the holiday by running the annual Firecracker 5k (recap still to come).  Since I didn’t sleep well the night before the race (I woke up at 3:30 a.m. and never fell back asleep – thank you pregnancy hormones!), we came home from the race and I took a nearly two hour nap.  That afternoon, we headed out to spend the late afternoon and evening with friends.  We enjoyed a dinner of pulled pork, potato salad, and a delicious zucchini salad, and a game of Cranium before we headed out to try and see the fireworks.  However, 4th of July here was very rainy and stormy, and less than two minutes after leaving the house we discovered that the local fireworks had been canceled due to the weather.  😦  Although the fireworks were canceled, we still had a very enjoyable, relaxing evening with friends.  After going downtown to see the fireworks on the National Mall for a number of years, it was nice to have a low key 4th of July evening instead.

We closed out the long weekend on Sunday with some more relaxing at home, as well as running errands.  The weekend was a perfect balance of running, relaxation, and time spent with friends.

QOTD: What did you do to celebrate the 4th of July?

This entry was posted in Races and tagged All 4 Run Virtual 4 Mile Race, fit pregnancy, Gone for a Run, virtual race. Bookmark the permalink.

34 Responses to Our Extended 4th of July Celebration