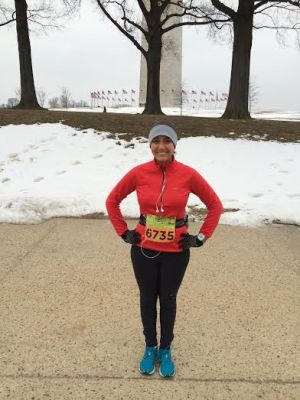 The race started and finished at the Washington Monument

18 hours before the race though I didn’t know if I’d actually be racing.  The DC area was under yet another Winter Weather Advisory, with predictions of snow, sleet, and rain on race morning.  With weather like what we had on Sunday, I’d usually not think twice about heading to the treadmill to get my miles in.  But it was race day, and I really didn’t want to back out.  Saturday evening Pacers, the local running store that put the races on, posted a weather update, and said that they’d post another update at 5:15 a.m., stating whether or not the race was on.  Pacers also gave runners the option to defer to next year.  When I got up Sunday morning, I immediately checked their Twitter page, saw that the race was on, and decided to bundle up and head downtown for the race as planned.  They did give runners the option to defer the race to next year, but I made the crazy decision to still brave the weather and race as planned.

For races downtown, Preston and I would normally take the Metro, but because of the weather, we opted to drive instead.  After arriving downtown, it took us less than five minutes to find a parking spot in front of the Smithsonian Castle.  The start and finish line for the races was in front of the Washington Monument, about a five minute walk from where we parked the car.  Although Preston opted not to run the races, he still came downtown with me for support.

We got to the race village about 20 minutes before the start of the 5k.  Both Preston and I quickly used the porta potties (there were plenty of them and zero lines), and then I sent Jenny a message.  She and I met up in front of the 11:00 min/mile pace sign.  It was so great to meet up with her, especially since we wound up running the 5k together. 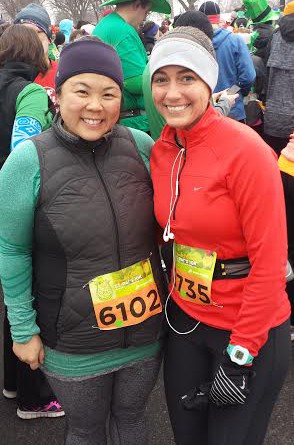 With Jenny before the start of the 5k

At 8:15, the 5k started, and within a minute or two we were off.  A couple of minutes into the race it started snowing, which helped make it a very peaceful race.  Both Jenny and I had planned to take the 5k easy, and although I had planned to use run/walk intervals, I quickly forgot about them since Jenny and I were busy chatting and catching up.  About a mile into the race Jenny asked me about the intervals.  Oops, I was so busy talking that I hadn’t even noticed that we’d already run a mile!  Instead, we kept our pace slow and jogged the entire race.  The 3.1 miles flew by and before I knew it we had crossed the finish line.

We had about 10 minutes in between crossing the finish line of the 5k and starting the 10k.  We quickly met up with Preston, he gave me some water, and then Jenny and I lined up near the 10:00 min/mile sign, ready to take off once again.  I went to take a Gu, realized that it was partially frozen, and got as much of it out as I could squeeze out. 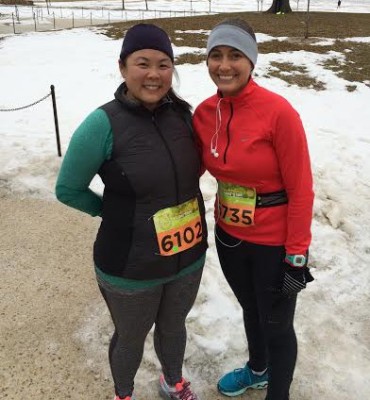 In between the two races

One of the nice things about the double is that the part of the 10k course is the same as the 5k course, taking runners along the Potomac River and past the Lincoln Memorial.  It was nice to have just run the 5k and previewed part of the 10k course.  That definitely helped me in gauging my pace for the 10k beyond just looking at my Garmin watch.

One big difference between the 5k and the 10k was the weather.  It continued to snow during the 10k, but about halfway through the race the snow turned to sleet.  When the sleet hit my face, it hurt, and didn’t just hurt a little, but a lot.  It fueled my motivation to increase my run/walk intervals from the 3:15/0:45 intervals that I did for the first three miles of the race to 4:15/0:45 for the second half of the race.  As the weather continued to change back and forth between snow, sleet, and at times rain, the course started to become very icy, and I worried about face planting in the middle of the race.  My fear definitely caused me to hold back a bit on my pace.  I would have loved to run faster, but my safety was more important.

Part of what Pacers had advertised was that they’d be closely monitoring the weather conditions and could make a mid-race decision to cut the 10k course short, having runners run a 4.5 mile course instead.  As we passed the mile 4 marker, course marshals directed us along the originally planned 10k route, cheering us on saying “You’re running the full course!”  I was quite relieved to hear this, since I was pushing towards a new 10k PR.  But those last two miles were very slick, and I had to hold back on my pace more than I wanted to.

During the last mile I knew I would finish very close to my previous 10k PR of 1:06:02.  I tried to push myself as fast as I could without risking my safety.  In the last quarter mile I knew it would be really close, and all I wanted was to PR, even if it was only by a couple of seconds.  With the finish line in sight, I started sprinting towards the finish, and crossed in 1:05:52, breaking my old PR by a mere 10 seconds.

While I wish I could have broken my old PR by more than 10 seconds, I’m proud of what I was able to accomplish on Sunday.  Not only did I run a 5k before the 10k, but it was under less than ideal weather conditions.  And it had only been one month since my car accident.  All in all, I was very pleased with how I did on Sunday, and it has me wanting to register for another 10k this Spring to really see what I’m made of.

I cannot thank Pacers enough for how well they communicated in advance of the races.  I cannot fault them for the poor weather, and they addressed it with plenty of updates for runners.  Saturday evening they announced that the water stops wouldn’t be present on the course, in an effort to prevent ice build up.  This was a very smart idea, and runners had plenty of warning to bring their own water (I wore my hydration belt).  There were more than enough porta potties at the start/finish line, as well as plenty of water at the finish line and plenty of food under the tents just past the finish line.  The only thing that disappointed me about this race was that the race medal is now being mailed to runners.  Medals were originally going to be handed out at the finish line, but Pacers made this change (and announced it on Saturday) in an effort to streamline post race cleanup.

QOTD: Did you/will you run a St. Patrick’s Day themed race?  What is the craziest weather that you’ve run in?