Back in August I started drinking Shakeology.  In September I shared my one month reflection, in which I noted that one of the biggest changes that drinking Shakeology helped facilitate was removing Diet Coke from my diet.  As somebody who used to depend on drinking several Diet Cokes in order to make it through the day, including having one for breakfast, it continues to amaze both myself and those who are close to me that I’ve been able to cut my dependence on soda. 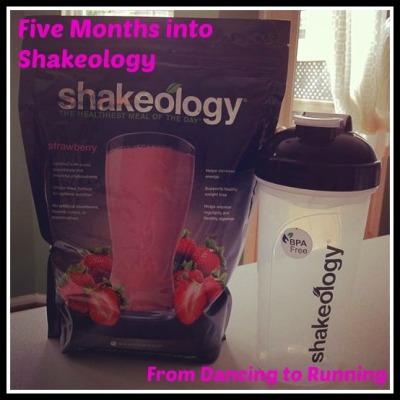 Since I started drinking Shakeology five months ago I have had a total of two Diet Cokes: one on Back to School Night in September when I was at school for more than 15 hours and another one day at Disney World when I didn’t have access to tea, my regular daily caffeine source.  (We were at Hollywood Studios that day and the new Starbucks hasn’t opened there yet.)  I’d say two sodas in five months is pretty good, especially considering how much of it I used to drink.

When I placed my first Shakeology order, I had no idea what I was getting myself into.  I was in search of supplementing my healthy diet in order to facilitate loosing a couple of pounds and in hopes of increasing my energy level during the day.  I had no idea how much changing my breakfast morning routine would impact my life though.

Over the past five months, the biggest changes haven’t come in terms of the pounds that I’ve lost and the inches that I have shed from my body.  Those accomplishments are certainly worth celebrating.  And while I’ve reached my goal weight and am proud to have had to buy new pairs of pants because several of my old pairs are now too big, the amount of energy that I have each day is worth so much more.

As somebody who used to drink multiple cans of Diet Coke just to make it through the day, the combination of one shake and one cup of tea provides me with more than enough energy to get through busy days.  I used to have to come home from work and take a nap before going to the gym, or I’d decide to not go at all because of how tired I was after a long day at school.  Now its extremely rare that I find myself in need of a nap after work.  Cutting soda from my diet has also resulted in me increasing the amount of water I drink each day.

With the exception of the days of races or long runs when I need more carbs, I’ve gone very few days without drinking a morning shake.  Not only do I love the taste of Shakeology (my favorite flavor is Strawberry), I also love how easy Shakeology is to travel with.  I just have to pack my shaker cup and my bag of Shakeology and I’m good to go.  Not only was I able to make my shakes each morning while we were at Disney World last month, courtesy of the milk and fruit available as part of the continental breakfast at the hotel that we stayed at, but I was even able to make my shake at the airport after going through security.  Just one carton of milk and a banana was all I needed to buy before boarding the plane and drinking breakfast on our 6am flight to Orlando.

Its safe to say that Shakeology has had a very positive impact on my life.  And it doesn’t hurt that Preston has commented numerous times about how much slimmer I look, especially in my thighs.  Its always nice when you’re not the only one seeing how changes that you’ve made to your diet have affected both your energy level and your physical appearance.

QOTD: Have you used Shakeology?  What changes have you been able to make to your lifestyle with the use of Shakeology or any other nutritional supplement?

Disclosure: I am not a Beachbody coach, and paid for my own supply of Shakeology.  In no way am I affiliated with Team Beachbody.  All opinions are my own.

This entry was posted in Food and tagged product review, Shakeology, Team Beachbody. Bookmark the permalink.

18 Responses to Five Months Into Shakeology