Posted on September 16, 2014 by Kathryn @ Dancing to Running

Six days after running my third half marathon I ran another race: the Arlington Police, Fire & Sheriff Memorial 5k.  Although my legs still felt heavy the morning of the race, I decided to at least attempt to run it, especially after Preston decided to run the race at my pace.  I’m not sure that I would have run the entire race had it not been for him running beside me.

We opted to pick up our race packets the evening of the race, and arrived in Crystal City where the race was held about 75 minutes before the start of the race.  Packet pickup was held in the basement of a local hotel, and after running our race shirts back to the car, as well as making a bathroom stop back at the hotel, we headed out to the start line.  One of my favorite parts of this race was that an American flag was hung from the ladders of two fire trucks.  It was the perfect backdrop for the start of such a patriotic race.

In the hour leading up to the race, I wondered whether or not the race would be delayed or canceled because of the threat of thunderstorms.  Fortunately, the race was able to be held as scheduled, and most runners crossed the finish line of the race before lightning started to appear in the sky.

With the storm rolling in though, the weather was anything but ideal for the race.  The temperature was well above 90 degrees and the humidity was close to 100%.  The weather was one of the main reasons why Preston decided to run with me at my pace.

The course started and ended in Crystal City, with a loop around the Pentagon.  While the course itself isn’t my favorite 5k course that I’ve run, I absolutely loved the support and entertainment along the course route.  The entertainment included a local high school marching band and bagpipers.  The sense of patriotism was more than evident at this race, which is the main reason why I decided to sign up for this race in the first place.

Despite how heavy my legs felt, and how unbearable the weather was, I was able to pace myself and keep moving until the last hill during the last half mile of the race.  I had slowed down to nothing much faster than a shuffle, but Preston encouraged me to keep trying and to not give up and walk.  I’m so glad that I did, because I was able to reach my A goal, having finished the race in 34:00.  While this is a couple of minutes slower than my current 5k PR, I’m beyond proud of myself given the weather and the fact that I had just run a half marathon six days earlier.

I must applaud the race organizers for quickly adapting to the storm that rolled in.  We received a bottle of water immediately after crossing the finish line, and the rest of the food and drinks were moved under an overhang in the front of the hotel.  There was more than enough food to go around, which included pizza, hot dogs, hamburgers, and bananas.  Drinks included water, Gatorade, and beer.

Because we were worried about driving through the storm, we didn’t stick around for long after the race.  After eating a couple slices of pizza and a banana (which served as our dinner for the evening), as well as enjoying a beer, we made our way back to the car and headed home. 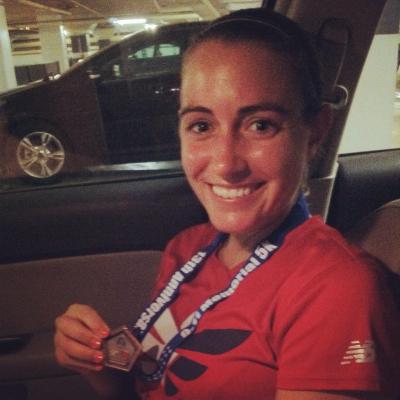 Proudly wearing my second medal of the week!

QOTD: What are the worst weather conditions that you’ve run in?