The Battle of Our Bodies vs. Our Minds

As runners, we’re often reminded that running is just as much mental as it is physical, that tackling those long runs and increasing our mileage is just as much an endurance test of our own mental stamina as it is of our physical stamina.  Many running experts say that running is 90% mental and the remaining 10% physical.  Experts have even proven this idea through the use of scientific methodology.

Often times, I find myself talking myself out of stopping because, deep down, I know I can finish what I’ve set myself out to accomplish, whether that’s a three mile midweek run or a longer distance run over the weekend.

But what about those days when your mind wants to keep going but your body just can’t keep up?

I had one of those days Tuesday evening.  When I walked into the gym, I had planned on running a 5k on the treadmill.  But as I got going, I could feel the heaviness in my legs from the past weekend’s eight mile run.  Not only were my legs heavy, but I had a Charlie Horse in one calf and twinging pain in the other.

Clearly I hadn’t let my legs rest enough after my long run two days prior.

About 1.5 miles into Tuesday’s run I knew that completing an entire 5k wasn’t going to be the reality that evening.  Although I was taking more frequent walk breaks than I usually do during my shorter runs, my body just wasn’t able to keep up with my mental strength that evening.  My brain and my body were definitely in a battle against one another. 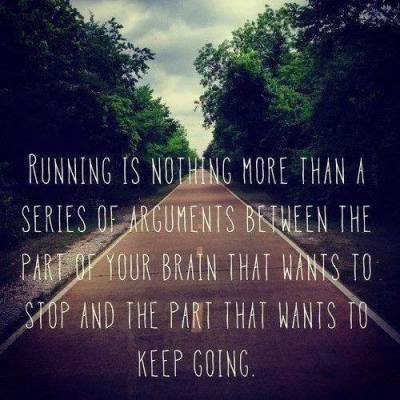 Tuesday evening was one of those times that I didn’t complete all the miles that I had planned on accomplishing.  The 10% physical part of my running capabilities won out against my mind, which is supposed to be 90% of my running.

It was a battle of my body vs. my mind.  And on Tuesday, my body won.

QOTD: Have you ever wanted to run further than your body wanted to allow you to?  Did you feel disappointed in yourself for not finishing all of your planned miles?

This entry was posted in Motivation, Training and tagged running, running tips. Bookmark the permalink.

19 Responses to The Battle of Our Bodies vs. Our Minds