It appears as though Punxsutawney Phil’s prediction last weekend for six more weeks of winter was correct.  After enjoying a gorgeous 59 degree afternoon on Groundhog Day, the temperature has been struggling to rise above freezing here in the DC area.  Today we’re in the midst of what’s been predicted to be the biggest storm to hit DC since Snowmageddon in 2010.  My school district made the decision yesterday evening to cancel school today.  We’re predicted to get anywhere between 6 and 12 inches of snow (depending on which forecast you look at) before the current snowstorm ends and leaves the DC area. 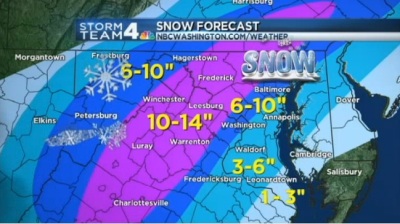 And I’m sure this isn’t the last of the winter weather.

I’ll fully admit, I’m over the 2013-2014 winter season.  Although I very much appreciate the breaks from my regular routine in the middle of what’s become a very hectic school year, we’ve already used our allotted snow days and are in jeopardy of pushing the school year into the last week of June.

But school isn’t the only reason I’m ready for the 13-14 winter season to retire.  I’m ready to be able to run outside consistently again.  Other than our races at Disney World, I have only been able to run outside three times since early November.  I’m not one for the cold, and I have difficulty breathing when I try to run outside in extremely cold temperatures.  Although I have strategies for coping with treadmill running, the treadmill simply cannot replace the enjoyment that I find in running outside.

Not only has the weather been preventing me from running outside, but the cold air has been a deterrent from getting to the gym as routinely as I’d like to.  Its become very easy to come home from work, curl up on the couch, and avoid going to the gym.  Although we have a very small gym in the basement of our apartment building, the equipment isn’t well maintained and its often overrun with young children who treat it as a playground.  It becomes quite aggravating every time I try to work out down there.

And when I do bundle up and make the trek to our local Gold’s Gym, I frequently shiver in sweat during the trip back home.

Its a no win situation with this winter weather, and I’m definitely ready for spring to be here.

QOTD: Which season(s) do you prefer running during?

This entry was posted in Motivation and tagged motivation, running, winter. Bookmark the permalink.

20 Responses to I’m Over Winter