One month ago today I became a half marathoner!  The runner’s high I’ve been on is still going strong, and although I’ve been a little easier on myself in terms of intensity and mileage during my current training cycle for Rock ‘n’ Roll USA, the emotions from crossing the finish line at Disney World have me holding my head high as I prepare for half #2.

Over the past month I’ve had time to process my experience during Marathon Weekend, both as a runner and as Preston’s #1 cheerleader for the Dopey Challenge.  We’ve discussed the pros and few cons of our experience, and overall had a very positive experience while running through Disney World.

We were fortunate to be able to celebrate our Marathon Weekend accomplishments with one last half day at Disney World before we headed to the airport.  We had a mid afternoon flight back to DC, and spent the morning and early afternoon at Magic Kingdom. 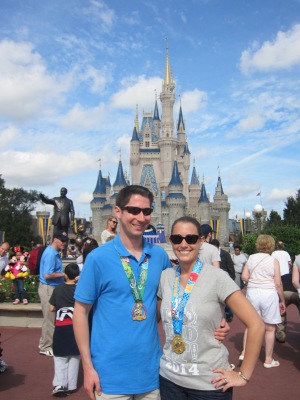 Celebrating our last day of Marathon Weekend at Magic Kingdom

Below are my final thoughts on our 2014 Marathon Weekend experience.  If you have a question that I haven’t addressed, please don’t hesitate to ask!

How did Preston and I train for Marathon Weekend?

We both followed versions of Jeff Galloway‘s training plans.  Preston followed a modified version of the Dopey Challenge plan, and I followed a modified version of the Dumbo Double Dare plan (which is the Disneyland Half Marathon weekend challenge where runners complete a 10k and half marathon on back to back days).  The modifications we made centered around the many fall races that we ran.

We both found Galloway’s training plans very manageable.  We both utilized run-walk intervals, especially during our long runs.  Most weeks we ran three days a week – two timed runs on weekdays and a long run on the weekends.  Some weeks we had a long walk on Friday or Saturday followed by a long run on Saturday or Sunday.  Although Galloway’s Dopey plan included two Dopey simulations, time limitations never allowed Preston to complete those.  Although I feared that Preston would be under prepared, he felt great during the races and actually recovered much more quickly than I did.

What was my favorite race of the weekend?

My favorite race of the weekend was the half marathon.  I absolutely loved the course.  Running down Main Street and through Cinderella’s Castle were by far the highlights of that race, and then crossing the finish line holding Preston’s hand was a moment that I’ll never forget.

Crossing the finish line of my first half marathon!
Photo Credit: MarathonFoto

What changes would you like to see runDisney make to Marathon Weekend in the future?

I’ve already shared most of my concerns about the 10k.  It was an inaugural race and I think there’s lots of room for improvement.  When we picked up our bibs at the expo and noticed that “inaugural” was misspelled on my 10k bib, that should have been a sign of the disappointment that we wound up facing during the race itself.  I’m thinking the 10k was a bit overlooked by runDisney since the big inaugural focus for Marathon Weekend was on the Dopey Challenge instead.

My 10k bib with “Inaugural” misspelled

As for the Dopey Challenge, the biggest snag Preston hit was the long line he stood in in order to get his finisher’s wristband after the 5k.  However, that problem appeared to have been rectified for the rest of the weekend, as there were virtually no lines after the 10k and half marathon.

Although many other runners indicated problems with the corrals for Marathon weekend, we didn’t experience the problems personally.  Preston was placed in Corral A for the 5k and 10k, and Corral C for the half and full marathons.  However, he registered for the challenge with Runner’s World, which gave him preferred corral placement (he would have been in Corral E for the half and full if he hadn’t registered with Runner’s World).  I’m not sure how the corral placements were done for the 10k, but I was placed in Corral B (Preston bumped back and started with me), and based on the Corral Placement Chart for the half marathon I was correctly placed in Corral I (which Preston again bumped back to).

How much time did we spend at the parks?

Were we exhausted each night after an early morning for a race followed by being on our feet at the parks?  Absolutely.  But would we change the way we approached our time at Disney?  Absolutely not.  We know that many other runners opted to not visit the parks until after they had completed all of their races, but we found walking around the parks extremely beneficial for helping to keep our legs loose. 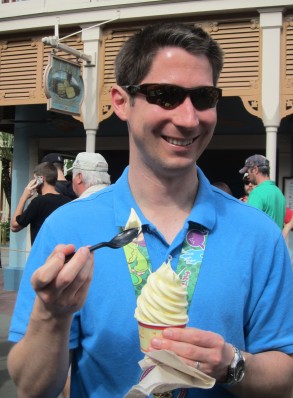 Preston and his celebratory Dole Whip

Will we run during Marathon Weekend again?

Currently, the answer is no.  The four early mornings for the races were very rough on us, and led to us having early dinners and leaving the parks earlier than we would have liked to in order to get to bed.  Training to run four back-to-back races also required a lot of time and dedication, which led to a very structured schedule in the fall and early winter.  Training was especially difficult around the holidays, as that was right before both of us started to taper.  For me, running 13.1 miles on a treadmill in cold and snowy Illinois just days before Christmas wasn’t ideal either, as it took precious time away from spending time with my family.  Preston is currently thinking about running either Goofy (the half and full marathons) or just choosing one Marathon Weekend race in the future, but who knows what the final decision will be each year when registration opens for Marathon Weekend!

What was your favorite part of Marathon Weekend?

There were so many highlights for me, many of which I’ve already shared throughout my Marathon Weekend posts, but without a doubt the number one best part of the entire experience was running and completing my first half marathon.

QOTD: Did you run during Marathon Weekend?  What was your favorite part of the race weekend?