Preston’s first leg of the Dopey Challenge was on Thursday, January 9th.  For those who are unfamiliar with this new runDisney challenge, the Dopey Challenge calls for runners to complete four races in four days – a 5k on Thursday, a 10k on Friday, a half marathon on Saturday, and a full marathon on Sunday – 48.6 miles altogether.  When we registered for Marathon weekend back in April, Preston’s plan had been to walk the 5k.  After further thought, he decided to run the 5k instead, but take it easy and stop for a few character photos.

Dopey Challenge runners received two bibs at the expo – one for the 5k and 10k and the other for the half and full marathons.  For the 5k and 10k Preston was placed in Corral A and started the race in the middle of the corral of 2,000 people, which allowed him to get ahead of many of the other 10,000 participants in the 5k, 7,000 of which were other Dopey runners.

Preston ready to get the Dopey Challenge started!

Our alarm went off on Thursday morning at 3:15am.  Our plan was to be on the first bus from our resort to Epcot, which left at 4:15am.  There was a Team #runDisney meetup scheduled for 5:15am that we had planned to attend, which unfortunately was canceled last minute due to the inconsistent way runners and spectators were being directed at the staging area at Epcot.  Since we had been able to get through to the Family Reunion area of the staging area, where the meetup was supposed to be held, we took advantage of the lack of crowds and took some fun photos in front of the Marathon weekend backdrops to kill time before the start of the race. 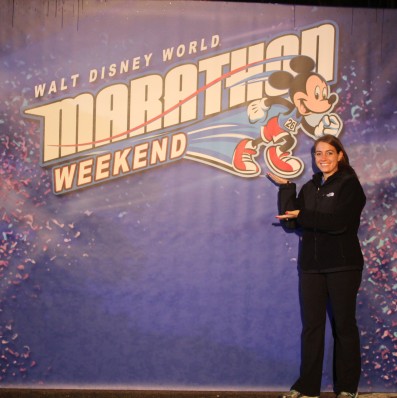 The 5k started at 6:15am with the wheelchair division, and Corral A followed shortly afterwards.  Unlike with the half and full marathon courses, the 5k and 10k courses allow for spectators to be directly alongside the start line, which is where I stayed until after Corral A had started.  Afterwards, I made my way to the finish line where I awaited Preston’s completion of the race.

Look how close I was to the start line of the race!

The first mile of the 5k course weaved through the parking lot at Epcot.  Runners entered Epcot in World Showcase in Mexico, and ran around World Showcase before running through Future World West.  The 5k ended with runners running past Spaceship Earth, exiting Epcot through the main entrance, and then crossing the finish line back in the Epcot parking lot.

I was at the finish line within the first four minutes of the race.  While waiting for Preston I saw the first place runner finish in under 16 minutes, who also happened to be a Dopey Challenge participant.  Clearly, he didn’t have the same plan as Preston did for taking the 5k easy!  I also saw Jeff Galloway cross the finish line as well as a couple of other bloggers, including Heather from Through Heather’s Looking Glass and Pam and Christine from We Run Disney.

Preston had estimated that he’d finish the 5k in about 30 minutes, and around the 45 minute mark I began to worry that I had somehow missed Preston crossing the finish line.  Although I had runner tracking set up for the weekend, it became apparent that although they timed the Dopey Challenge runners for the 5k (the 5k is usually an untimed event), runner tracking wasn’t in effect that morning.  I texted him, and he told me that he had gotten held up in line waiting for a picture with Dopey.  Phew!

Preston and Dopey in Germany

Ready to exit Epcot and cross the finish line

After waiting in line for a picture with Dopey for about 20 minutes, Preston crossed the finish line at 51:30.  For Preston, this is more than double the amount of time it usually takes for him to run a 5k, but it was Disney World, he stopped for pictures, and he didn’t push himself too hard since he still had three races to run after the 5k.

Preston getting ready to cross the finish line

After Preston crossed the finish line, he got his medallion and then had to wait in line for the Dopey Challenge 5k finisher wristband.  He had to have waited in line for at least 15 minutes – good thing runDisney seemed to have worked the kinks out of the system since the line the next day at the 10k went much more quickly. 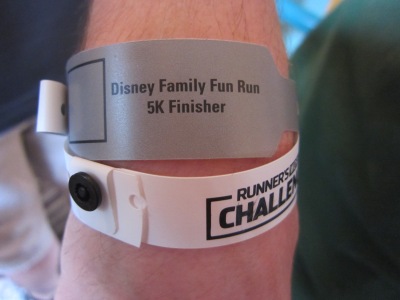 After each race, Dopey Challengers received a finisher’s wristband to show proof of completion of each leg of the challenge…additional wristbands to come!

Leg 1 of the Dopey Challenge complete! Only 45.5 miles left to go!

After the 5k we headed back to the hotel for a quick shower and then headed off to spend the day at the parks.  We knew that of all the days we’d be spending at Disney World that this would be the day we had the most time to devote to the parks, and we split our time between Animal Kingdom in the morning and Epcot in the afternoon.  We were able to ride many of our favorite rides in both parks, including Kilimanjaro Safaris, Expedition Everest, and Test Track.  We also ate both lunch and dinner at Epcot at two restaurants that neither of us have eaten at before – we ate lunch at the Japanese quick service restaurant, Kastura Grill, and dinner at Tutto Italia.

After an early dinner, we had Fast Passes for Test Track, and then returned to our hotel around 8pm for a similar routine from the night before.  We set out our race clothes and bibs for the inaugural Disney World 10k and set our alarm for yet another early morning.

QOTD: When you’re at Disney World for races, do you spend as much time at the parks as possible or try to stay off your feet as much as possible?