I cannot believe that next Wednesday marks the start of 2014!  Where has 2013 gone?!?  If your year has been anything like mine, it has been jam packed with lots of activity, both fitness and non-fitness related.  As I look back, I’m amazed at all that I did, and I cannot wait to see what lies ahead for me in 2014!

My theme for 2013 was change, highlighted of course by my decision in March to start running.  Change has always been difficult for me, so as I reflect back on the past year its amazing to think back on all the changes that I faced this past year and how I embraced them. 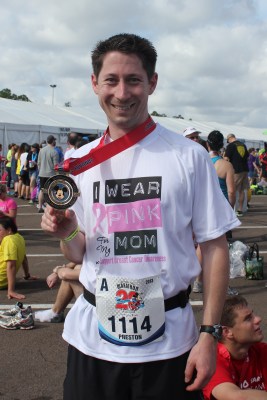 Preston after he finished the marathon

We kicked off 2013 with our five day trip to Disney World, where Preston ran the Disney World Marathon.  The marathon was an incredible experience for both Preston and I, as it was his first marathon and it was at Disney World where I was first inspired to start running myself.

Riley the day we brought him home from the shelter

On February 15th we added a member to our family.  We adopted our then eight month old English Springer Spaniel, Riley.  We’ve learned a lot from Riley over the past ten months, particularly about prioritizing and time management.  The shelter we adopted him from didn’t fully disclose some of his medical issues to us, which the vet later uncovered.  Our experience in adopting and adding Riley to our family has definitely helped better prepare us for when we eventually decide to add children to our family.

It was in March that I made the decision to start running, as well as to start this blog.  After weeks of reflection after Preston’s completion of the Disney World Marathon, as well as some prayer and self discovery, I decided that I wanted to set my sights on running my first half marathon.  Its incredible to think that in just over two weeks this first leg of my running journey will come full circle when I cross the finish line of the Disney World Half Marathon!

Before completing my first race of my half marathon training

On April 27th I ran my first race as a part of my running journey, the Jaguar 5K.  Although I’ve participated in this race in the past, this was the first time that I’ve trained for this race, or any other race for that matter.

May was an extra busy month for us.  One of the highlights was my second race, the Semper Fi 5K.  We also spent Memorial Day weekend at Rehoboth Beach with two close family friends.

May also marked a turning point in my career.  The day before we left for Rehoboth Beach I interviewed for and accepted a new teaching position at a new school in my school district.  Because change is very difficult for me, the reality of this new job took quite awhile to sink in.  After five years at the same school, I knew it was time for a change, but that didn’t make it any easier to face the reality of the change.  In hindsight, I know this job change was for nothing but the better, but change has always been difficult for me.

With the happy mama to be

I kicked off June by co-hosting a baby shower for one of my best friends, Linda.  Preston and I also flew to Illinois to host a surprise 30th anniversary party for my parents with my sisters.  In June I also packed up my classroom at my old school and said farewell to the school that I called my “work home” for the first five years of my teaching career.

My first photo at Disneyland, taken as we entered the park

On July 4th I ran my third race, the Firecracker 5K.  I also ran my first 10K on July 14th, the Biggest Loser 10K.  At the end of July we left for southern California and started our 13 day adventure to celebrate our second anniversary, which included my first trip to Disneyland and visiting our good friends Tanya and Steve in San Diego.

No trip to Disneyland would be complete without saying hi to Mickey!

During our southern California trip, Preston and I ran the Balboa Park Three Miler, not for time but more as a way to force ourselves to run during our trip.  August ended with my first days of work at my new school, and traveling to Virginia Beach for Labor Day weekend.

There’s no better way to celebrate a summer race than with your feet in the sand!

Preston and I kicked off our race filled September with Rock ‘n’ Roll Virginia Beach.  He ran the half marathon and I ran the mini marathon.  We ran two other races during the first week of September – the Electric Run 5K on September 6th and 9/11 Memorial 5K on September 7th.  A week later, we ran yet another 5K, the Dulles 5K on the Runway, which thus far has been my most incredible race experience to date.  I ended September with my second 10K, the Perfect 10 10K, which I PRed by over seven minutes!  In September I also redesigned my blog and started my Dancing2Running Twitter page.  September was definitely a busy month! 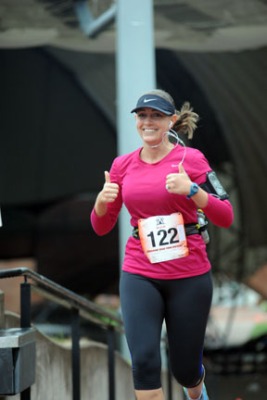 The hills in Charlottesville didn’t hinder my spirit or enthusiasm to do the best that I could
Photo Credit: Competition Imaging

Preston and I spent the first weekend of October in Philadelphia supporting his dad and siblings during their participation in the Susan G. Komen 3 Day Walk.  Over Columbus Day weekend, I ran my third 10K and tackled my hilliest course to date at the Charlottesville Fall Classic.  Mid October I attended my five year college reunion and volunteered at the Army 10 Miler.

On November 10th I ran my last race of 2013, the Veteran’s Day 5K.  On November 23rd I walked for my friend Tammy at the St. Jude Give Thanks Walk.  I also attended my first football tailgate, and we ended the month celebrating Thanksgiving in New Jersey with my in-laws.  And if not enough had already changed in 2013, I found out in mid November that one of my best friends, Linda, would be moving to Germany in mid-December.  It was definitely a bittersweet announcement, but I couldn’t be happier for them in their new adventure. 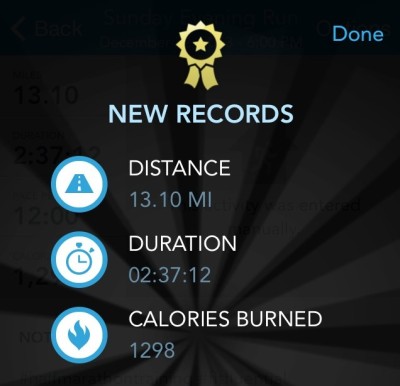 We spent Christmas in Illinois with my parents and sisters.  During our time in Illinois, I ran 13.1 miles for the first time, and then started tapering afterwards.  Today we’re headed out of town for Christmas Round 2 with my godmother’s family, and Christmas Round 3 tomorrow with my in-laws.

QOTD: What accomplishment from 2013 are you most proud of?