Last Sunday I ran my second 10K, the Perfect 10 10K.  This race had two distance options, a 10 miler and a 10K.  Because I was in need of a 10K time to submit to runDisney for my corral placement for January’s half marathon, I opted for the 10K (my longest distance thus far is also only seven miles), while Preston opted to run the 10 miler, his first 10 miler since running the Cherry Blossom 10 Miler in April 2012.

I went into last weekend’s race with very high expectations for myself.  I set lofty goals to focus on, but also had the odds against me leading up to the race and on race morning itself.  I battled a sinus infection starting several days before the race, and the morning of the race we overslept and left our apartment at the time that we had wanted to arrive at the race site in Reston.  Driving to the race, the odds were not in my favor for meeting my race goals, let alone finishing in a decent time.

God was on my side though, and miraculously neither my sinus infection nor feeling rushed the morning of the race impacted the race itself.

The race started and finished at South Lakes High School in Reston.  Since we left late, I was very worried that we wouldn’t easily be able to find parking.  As we left our apartment, I texted my friend Kristen who was also running the race to let her know that we were late and that we’d have to meet up after the race.  Both she and Preston tried to reassure me that even if we arrived a few minutes late that the chip timing system wouldn’t impact my ability to start the race late.  Fortunately, the traffic gods were on our side and we made it to Reston and found parking without any problems.

We walked up to the starting area about ten minutes before the start of the race.  Although I had eaten a filling breakfast, I immediately took a GU Energy Gel in order to ensure that I was fully energized for the race itself.  And before I knew it, the starting horn was sounded and we were off. 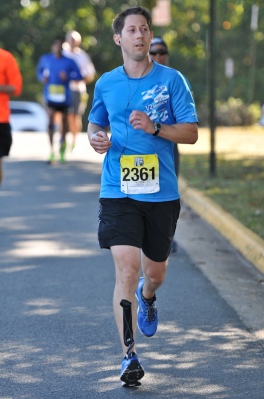 My plan had been to run-walk in a 2:1 interval: two minutes of running, followed by one minute of walking.  Because this race didn’t have starting corrals, the first half mile or so was very packed, and I didn’t feel safe stopping to walk, in fear that I’d be run over.  After running for five minutes, the crowd had thinned out a bit, and I started my run-walk intervals.  I missed the signal of my Timex to start walking after running for two minutes, and quickly found myself settling into a 3:1 interval for the first four miles of the race.

At some point in the second mile I heard a familiar voice behind me.  It was my friend Kristen!  Since she knew that I had been sick, she reminded me to not overdo it (she of course came up on me as I was blowing my nose).  I thanked her for her kind reminder, and she took off ahead of me, and wound up finishing about two minutes faster than I did.

Since my finish time goal was under 1:15, I was very focused on making it to the three mile mark before 37:30.  I reached mile three at 33:17.  At that point I was confident that I could not only finish in less than 1:15 but that I could also PR at this race (my only other 10K finish time was estimated at 1:17:22).  My positive mindset and anticipated celebration carried me forward into my fourth mile, during which I took another GU Energy Gel during one of my walk intervals.

More than at any previous race, I felt great throughout the entire race and even had the energy to smile for the camera

Around mile 4.5 I felt even more confident about my abilities, and pushed my run-walk interval from 3:1 to 4:1.  Despite having to continue to blow my nose during my walk intervals (thanks again sinus infection!), I completed the last 1.5 or so miles of the race at this run-walk ratio.  When I crossed the finish line at 1:10:17, I still had some energy and felt like I could have run another mile or so.

Approaching the finish line, which was on the track at South Lakes High School

After I finished, I met up with my friend Kristen and we awaited Preston’s arrival at the finish line.  This is the first time that I have finished a race before him, so it was nice to be able to cheer him in when he finished the 10 miler at 1:27:07. 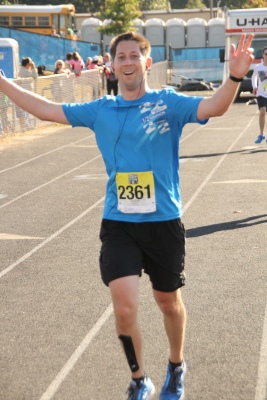 I went into this race with three goals:

1. Finish the race in under 1:15 (pace of 12:04 min/mile).  I’m ecstatic that despite the odds I faced, particularly with being sick, that I finished in 1:10:17 (pace of 11:19 min/mile).  This course had more hills than I thought it would, so I’m hopeful that this will help me to be better prepared for this weekend’s Charlottesville Fall Classic 10K, which I’ve been warned is also a hilly course.

2. Maintaining a positive mindset throughout the entire race.  This race, more than any other race, has been one where I’ve not only remained positive, but maybe almost overly confident in my abilities to succeed.  Because I crossed the three mile mark nearly four minutes ahead of my pace goal, this boosted my confidence and helped fuel my push to increase my run-walk interval from 3:1 to 4:1.

3. Properly hydrating myself prior to the race.  Without getting too TMI, let’s just say that I used the porta potties much more frequently before and after this race than I have at past races. 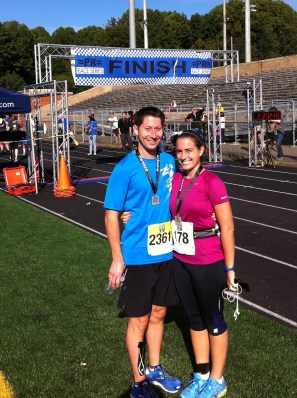 This race didn’t have a particular charity associated with it, so I ran with Charity Miles for the primary beneficiary of the Disney World Half Marathon, the Leukemia and Lymphoma Society.

Overall, this race was an experience that I’ll never forget, if anything because I proved to myself that being sick isn’t enough of an obstacle to slow me down and prevent me from accomplishing what I set out to do.  This race also has set the bar high as far as what I hope to accomplish in Charlottesville this coming weekend.