Posted on September 14, 2013 by Kathryn @ Dancing to Running

Last Friday evening, Preston and I had the privilege to participate in the Electric Run DC. For those who haven’t heard about the Electric Run series, its an untimed running event where you run while glowing in the dark.  Its a noncompetitive run that’s meant to promote runners having fun as they run through a lit up course.  Included in our race packets was a pair of glow in the dark glasses, and most people wore glow in the dark necklaces and bracelets.  Preston felt like we were at a rave, if that description helps you better understand what the course was like.

We arrived at National Harbor several hours before the 8:00pm start time.  Since we didn’t pick up our race packets prior to the night of the event, we had to pay an extra $5 for race day pickup.  I’m not sure that this extra charge did enough to discourage runners from picking up their bibs the day of the event, and it also made me feel as though Electric Run was nickel and diming us.  This is one of my few, but definitely my largest, complaint about our experience last Friday.

After picking up our packets and grabbing a quick prerace dinner at Subway, we met up with our friends that we’d planned on running the race with.  We killed a couple of hours with them prior to the start of the race, which included enjoying the sunset over the Potomac River and watching a wedding party take their photos.

My friend Jen and I out on the sand at The Awakening, ready for a fun run through National Harbor

About 15 minutes prior to the start of the race we started to make our way to the starting corral.  8:00 came and went, and I assume the reason for the delayed start was because Electric Run wanted it to get a bit darker in order for the lights to have their full effect on the course.  I was fine with this (we were participating not to get a great time but rather to have lots of fun), and they provided us with lots of prerace entertainment.  We also took lots of photos to pass the time.

Preston and I ready for the Electric Run 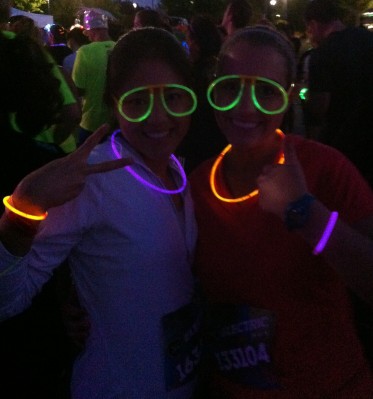 Jen and I ready to rock the Electric Run

Around 8:15pm the run finally started.  We were started in waves (it looked to be a couple hundred people at a time), but unfortunately this did little to relieve the congestion on the 5K course, particularly during the first mile.  Parts of the course were on dirt paths, which made for very narrow areas and lots of additional congestion.  Its a good thing we weren’t running for time, as we spent quite a bit of the first mile weaving through walkers and slower runners.

After we passed the first mile marker, the crowd began to thin out.  At the water station, we had the option of a Rockstar energy drink or water.  I loved that the water cups both at the water station and at the end of the race were in colored plastic glasses that glowed in the dark.  Great added touch to the theme of the race!

One of the water tables at the finish line

As we passed the second mile marker, I realized that I hadn’t been taking any pictures.  Oops!  This was a fun run after all, and we didn’t have chips on our bibs, so why wasn’t I taking pictures.  Although Preston and I had been self timing the race, I realized that the weaving had destroyed any hopes of a decent pace, so I opted to start neglecting the time on my watch and started going photo crazy.

I loved the glow in the dark umbrellas 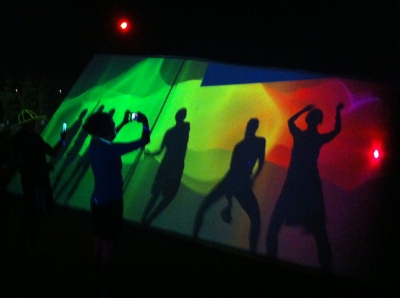 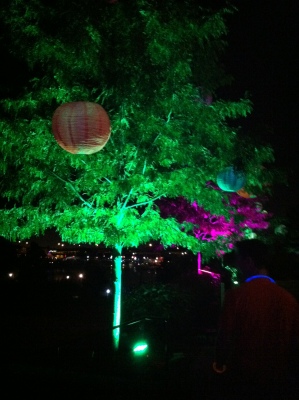 The lit up trees behind the Gaylord Hotel were gorgeous

My picture taking slowed us down a bit, but we eventually made it to the finish line, which is where Preston really felt like we were at a rave.  One thing I didn’t like about this race was that there was no finishers’ corral, so runners and spectators crowded the finish line, making it very difficult to make it to the water tables after finishing.  My only other complaint about the race was that some areas of the course were nearly pitch black.  I was very concerned about tripping over something or rolling my ankle, which was the last thing I needed to have happen since I’m still wearing the ankle brace from when I sprained my ankle back in May.

Although the race was untimed and not associated with any charities, I still used my Charity Miles app and completed another 3.1 miles for the Wounded Warrior Project.  I elected to run for this charity since we greeted two honor flights at the airport the next morning and ran the 9/11 Memorial Race the next evening.

Despite the couple of flaws with the Electric Run, it was an overall great experience.  It was certainly a nice change of pace to have a fun run instead of focusing on running at a certain pace and finishing in a certain time frame.  At this point, I’m a bit indifferent about whether or not I’d want to participate in another Electric Run event again, but I am very glad that we participated this year.

QOTD: Do you ever complete runs just for the fun of it, or do you always aim for a specific pace and/or finish time on your runs?