When we registered back in May, I noticed on the event website that the primary charity that Rock ‘n’ Roll Virginia Beach supports is St. Jude Children’s Research Hospital.  When I saw this, I immediately thought of my friend Tammy, who faced a four year battle with cancer and received most of her treatment at St. Jude.

Tammy and I first met in seventh grade.  We were on the same academic team at Chiddix Junior High School, had most of our classes together that year, and quickly became friends.  In the summer of 2000, the summer before we started high school, Tammy was diagnosed with Alveolar Rhabdomyosarcoma, which is a rare form of cancer that attacks the body’s muscular tissues.  While many 14 year olds would approach such a diagnosis as though it were the end of the world, Tammy held her head high throughout her treatment.  Like most other cancer patients, her hair quickly fell out as a result of her chemotherapy treatments, but despite this and the other side effects she experienced she never once let herself feel depressed by the challenge she faced.  She faced her challenge with the support of many people, including one of our male friends who allowed Tammy to shave his head as a way to support her in her own hair loss.

Tammy (third from the left), myself, and some of friends at our Sophomore Homecoming Dance in September 2001

Despite her own illness, Tammy continued to always put others first.  Shortly after she was first diagnosed I had an emergency appendectomy.  While recovering at home, I received a card in the mail from Tammy, saying that so many of us had come to her house to cheer her up while she was sick and that now they needed to do the same for me.  This was just one of the many examples of Tammy’s selfless character and how she never used her battle with cancer as an excuse for continuing to persevere and enjoy life.

During our freshman year of high school, Tammy’s time was split between home and Memphis, where she received her treatment at St. Jude.  As her cancer spread, her time at St. Jude increased, and by the middle of our sophomore year Tammy was too sick to continue making the trip between Memphis and our hometown of Bloomington, and began receiving home bound instruction in Memphis.  Tammy’s focus was on one thing – to do whatever was necessary to graduate high school and walk across the stage at graduation with the rest of our class.  Her focus on her education helped distract her from the pain she endured.  Tammy graduated with a 5.0 GPA, as well as a member of National Honor Society.  In addition to studying, Tammy also spent time crafting, including making candles that became the centerpieces at our Senior Dinner.  She continued to remain focused on walking across the stage at graduation, and it wasn’t until three days before graduation that her doctors told her and her mom that it wasn’t in Tammy’s best interest to make the nearly seven hour drive from Memphis back to Bloomington for graduation. 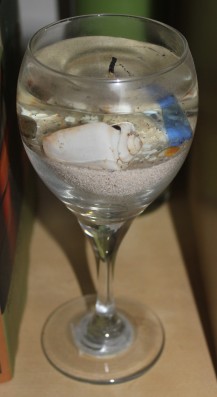 One of Tammy’s candles, which currently sits on a bookshelf in my apartment as a reminder to never give up and accept defeat

Throughout her treatment, Tammy never wanted to give up.  She was willing to try various treatments, and kept herself busy with studying and crafting.  She always said she would rather die doing something she enjoyed as opposed to just lying in a hospital bed feeling sorry for herself.

During our senior year, the Normal Community High School Spirit Club started the “Tabs for Tammy” campaign.  While in Memphis, Tammy and her mom stayed at the Ronald McDonald House, and the purpose of the campaign was to fill milk jugs with soda tabs, which the House would then recycle and use the money from in order to support its ministries.  The club’s goal was to fill 334 jugs, one for each member of our Senior class, but the school and community’s response to the campaign was beyond anybody’s expectations, and the club received enough tabs to fill 800 milk jugs.  Many of the jugs were decorated by members of our Senior class, and many of us also wrote messages to Tammy and her mom on the jugs. 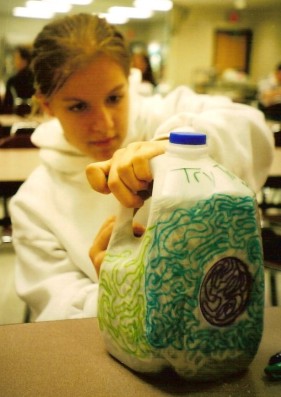 As many of our classmates were starting their first semester of college, Tammy’s condition continued to worsen.  Sadly, Tammy’s battle came to an end on September 20, 2004, when she passed away from complications from her chemotherapy treatments and two stem cell transplants.  Being at school in DC, getting home for Tammy’s memorial service wasn’t easy, but thanks to my parents’ generosity I was able to purchase a plane ticket home in order to honor and celebrate Tammy’s life.  And that’s exactly what I plan to do next Sunday.  Every step that I run in Virginia Beach will be for Tammy.

4 Responses to Running for Tammy